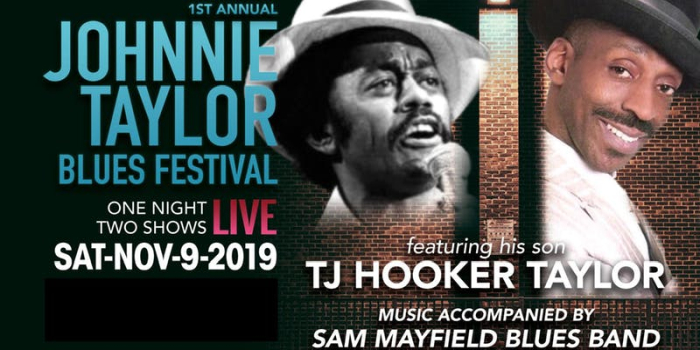 TJ Hooker-Taylor comes from a musical family. His mother, Mary Ann Hooker, and father, the late Great Johnnie Taylor, raised him in church.

At the age of ten he joined his first group, The Young Golden Voices, who performed at all the churches in the Kansas City area. At the age of sixteen, TJ started an R&B band called The Grand Jury Band, who opened for many top acts that came to the city, like The Bar-Kays, Cameo Slave and many more. Some of the members of that band went on to become the group Low-Key, which was signed by top R&B producers Jimmy Jam and Terry Lewis.

At the age of 21, TJ’s young voice started to change. “I could hear that [Taylor sound]. I had never tried to sound like my dad, I didn’t even like the Blues. But on my 25th birthday I was given a chance to open for my dad and get paid,” says Hooker-Taylor. “That’s when the Blues hit me.”

Unapologetically proud of his lineage, Hooker-Taylor has released CD’s independently with that Johnnie Taylor sound, albeit with mostly new, original songs. His most recent, The Total Package, featured the hit song, “Player Haters.”