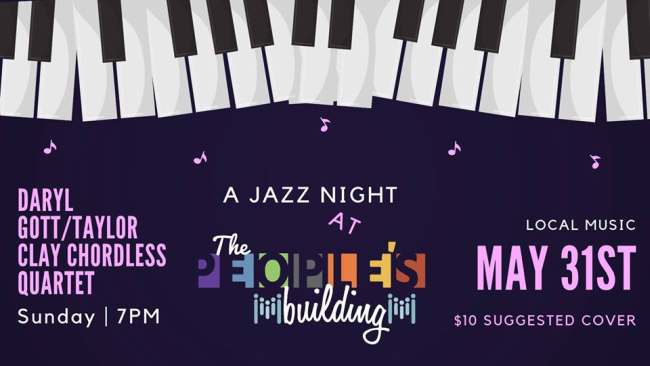 Colfax East gets jazzier with another night of fantastic music at The People’s Building.

Daryl Gott:
Originally from Denver, Colorado, Daryl Gott attended the Denver School of the Arts for high school and was a member of the Colorado Conservatory for the Jazz Arts. During which time he also studied saxophone with Rich Cairaluce. He went on to study jazz saxophone at the City College of New York where he studied privately with saxophonist Jon Gordon. Upon graduating, Daryl moved back to Denver to pursue his music career. Since 2011, Daryl has been playing professionally around Denver as well as around the country. He has performed with some of the nations top talents including Eric Gunnison, Greg Gisbert, Paa Kow, Danny Gottlieb and Dick Oatts among others. Daryl’s improvisatory style is very melodic and warm while remaining versatile. He performs weekly at The Meadowlark (Monday’s) and Herbs Bar (Tuesday’s), as well as maintaining a very busy freelancing schedule.

Taylor Clay:
Born in Brooklyn, NY, Taylor began his musical journeys at the age of 13. In high school he won awards with his schools jazz band as well as performed in the All-County concert band. Taylor then studied with Dr. Christopher Creviston and Bret Zvacek at the Crane School of Music in Potsdam, NY. During this time Taylor also studied with such artists as Eric Alexander, Mitch Frohman and Lenny Pickett. After completing his degree in Music Performance in 2012, Taylor moved to Colorado to attend the University of Northern Colorado as a graduate student and teaching assistant. Here Taylor studied under the supervision of Andy Dahlke, Steve Kovalcheck and Jim White. Now Taylor lives in Denver, Colorado working as a freelance musician.