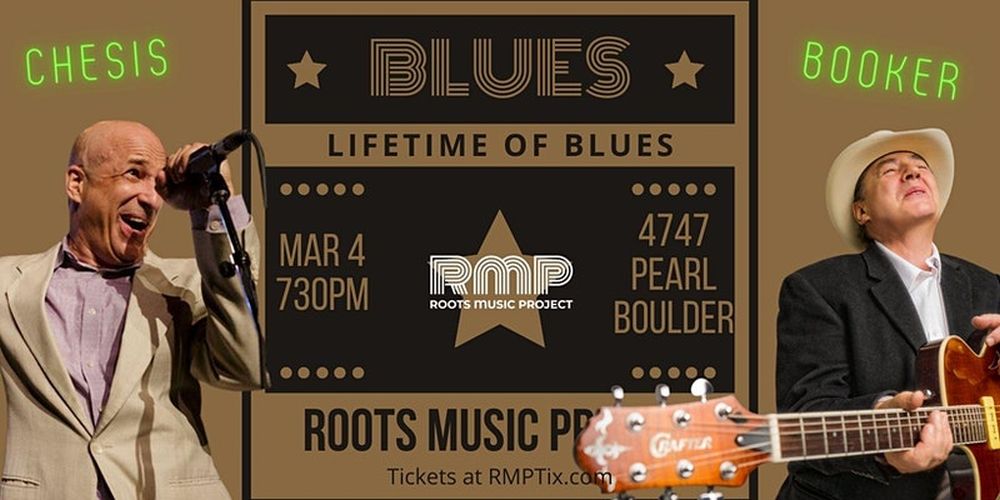 Celebrate a LIFETIME OF BLUES with Blues Legend Al Chesis and David Booker! A very special night for the Colorado Blues Community.

David and Al are two legends of the Colorado music scene and beyond. Come celebrate a LIFETIME of ACHIEVEMENT. Hear their stories first hand and congratulate them on a lifetime of blues well-played!

The night will feature Al and David’s full bands, a legendary jam session, and special guests. This is THE BLUES night to remember on the Front Range.

AL CHESIS: Al has been playing the blues professionally for over 3 decades. His weapon of choice is the blues harmonica (harp). His blues chops are only rivaled by his wry sense of humor and snappy attire.

He opened for Albert Collins, Elvin Bishop, Taj Mahal, Canned Heat, and others. Al was featured at SPAH (Society for Preservation & Advancement of Harmonica) in (2006)(2015) and Mark Hummel’s Harmonica Blowout in 2009 with Kim Wilson, Magic Dick, Jason Ricci, and Mark Hummel.

David has opened for Los Lobos, John Mayall, Albert Collins, Koko Taylor, A.C. Reed, and many other Legends of The Blues. He moved to Colorado in 1981 and has been playing music full-time ever since.

City of Boulder mask exemption requires ALL ATTENDEES MUST SHOW PROOF OF VACCINE.