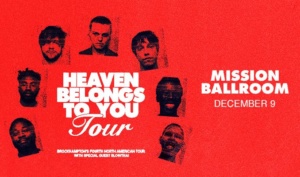 Brockhampton, stylized as BROCKHAMPTON, is a California-based American hip-hop collective. They were formed in 2015 in San Marcos, Texas. Brockhampton was founded on an internet forum, KanyeToThe, leading them to be described as ‘The Internet’s first boy band’. They released their first mixtape All-American Trash in 2016, their first album, Saturation, in June 2017, and their second album Saturation II in August 2017.

Brockhampton: Heaven Belongs to You Tour