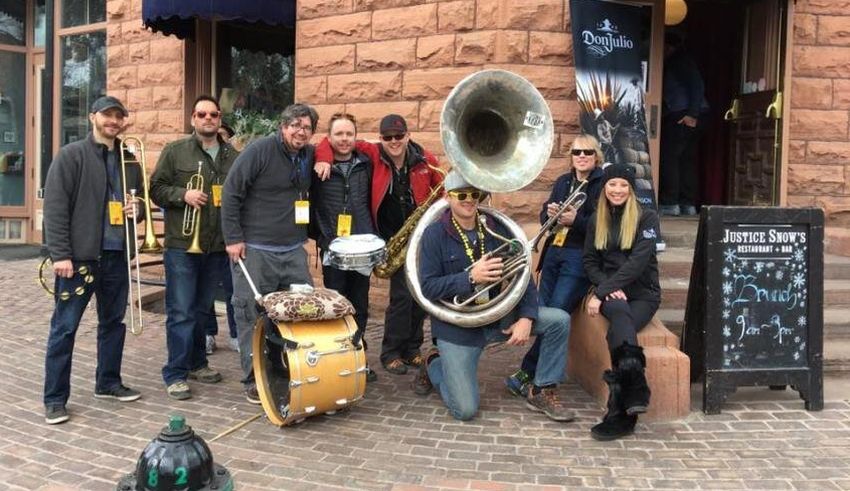 The Otone Brass Band has been bringing the New Orleans brass band sound to the Rockies for almost 20 years. Their unique blend of original music, high energy, and second line grooves has left audiences so full they have to let out their belt. You may have seen them at the Vail Jazz Fest, Film on the Rocks, the 5 Points Jazz fest, the Estes Park Jazz Fest, the Peoples Fair, the Longmont Jazz Fest, or even at the Democratic National Convention or the Aspen Apres Ski Cocktail Classic. The Otones have shared the stage with such groups as Galactic, Ozomatli, and the Dirty Dozen Brass Band at such venues as Red Rocks, the Blue Bird, the Fox Theater, and the Boulder Theater. With a fully mobile sound the Otones have brought the grooves to parades, pub crawls, marches, weddings, and all the crazy things requiring music on the go. 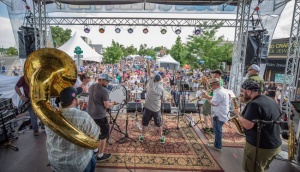 Tivoli Club Brass Band – It’s like a little bit-a’ green chile on yo’ boudin. Denver’s most beloved brass band brings the tradition of the New Orleans Second Line to the Mile High. A Centennial State jambalaya of classic and contemporary hits, micro-brewed with the flavors that make Colorado the greatest state in the union. Featuring a veritable superband of who’s-who in Denver local music; musicians who’ve been playing this scene since before it existed, with bands like Furious George and the Monster Groove, Judge Roughneck, Sammy Mayfield Blues Revue, Money Plays 8, the Flobots, Til Willis, Bow Shock, Future Joy, FaceMan, Oxycodone, Alpha Schoolmarm Orchestra and dozens more. 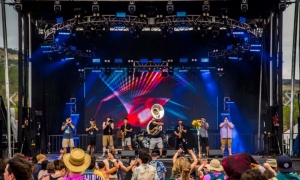 The Guerrilla Fanfare Brass Band (or simply Guerrilla Fanfare or GuFa) brings the high energy funk of New Orleans-style Brass Band to the Northern Colorado area. Our mission is always to get everyone up and grooving to our relentlessly fiery and funky sound. GuFa is composed of some of the finest and rowdiest horn players and percussionists in Northern Colorado, and performs hard-hitting funk, New Orleans Second Line style, fiery originals, and raucous arrangements of modern pop hits.