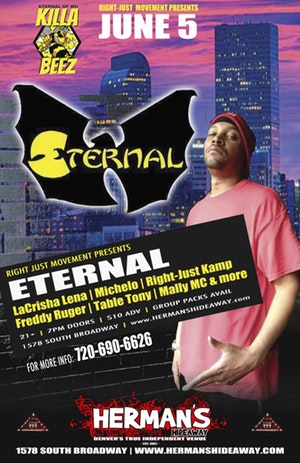 Born and raised in San San Diego, CA, Eternal developed a deep passion for music at the young age of seven years old. It wouldn’t be until the age of fifteen that Eternal would begin writing down the lyrics he heard in his head and perfecting his skills. At the age of sixteen Eternal was able to get himself studio time and began to record his music and perfect his flow. He would then spend the next three years perfecting his style and lyrics and at the age of 19 he set out to make music his full time career. Instead of waiting for a label to show up or a financier to step into his life Eternal blazed his own path to success forming the legendary San Diego group Kastlevania. Kastlevania’s first release was “Str8 From Tha Dungeon” which Eternal not only rapped on but also produced all of the music for. “Str8 From tha Dungeon” released in 2000 was distributed nationally through major retail chains across the United States, which Eternal also lined up. The Success of “Str8 From Tha Dungeon” combined with Eternals consistent networking led him to not only establishing himself as a factor in the San Diego music scene but also to his first nomination at the San Diego Music Awards for best album. After his nomination Eternal returned to the studio and created Kastlevania’s sophomore album “Kastlevania 2; The Battle Angels.” Once again Eternal rapped on the project and produced every track on it. The album released in 2002 was nominated for two awards at the San Diego Music Awards for best group project and album of the year. The project won the Album of The Year award, which in turn further exposed Eternal’s name in the West Coast music scene.

With the release and success of both Kastlevania projects Eternal set out on a tireless networking campaign that would see him not only performing on shows weekly but also creating relationships with other artists across the United States. In 2006 Eternal returned to the studio to create his highly anticipated solo EP “Blazed & Konfuzed.” Upon the release of the project Eternal was once again nominated at the San Diego music awards for Best Album and later joined forces with another San Diego group Comfortable Creeps with his group Kaslevania to form Kastle Creeps to release another interesting self titled project “Kastle Creeps” in 2009. After the release of his album Eternal connected with the one of the founding members of the West Coast Killa Beez and Black Knight member, The Rugged Monk who immediately recognized Eternal’s dangerous combination of a presence behind the mic crossed with his never say die attitude. Monk immediately made Eternal a member of the West Coast Killa Beez and Eternal made it his priority to continue creating classic music while representing the ever growing Wu-Tang movement. This new affiliation combined with his established name as a solo artist has led Eternal to not only sell over 50,000 units independently but also perform along such notable artists as; Cypress Hill, RZA, Ice T, Too Short, Devin The Dude, Bizzy Bone, Project Blowed, Killarmy, Killah Priest, Papa Chief of Brooklyn Zoo, Canibus, Ill Bill, Necro, Souls of Mischief, Black Knights, The Indovizualz, and many more.

Eternal strives to be more than just an artists, he recently launched an online show “The Eternal Show” which has been described as a Hip Hop version of MTV’s popular TRL featuring in depth interviews, behind the scenes footage and shows with artists such as Raekwon, Planet Asia and Brooklyn Zoo. The show is Eternal’s way of not only spreading his music, the “W” and name but also showcasing the independent artists he is around on a daily basis, who normally might not get the attention they deserve.

While versatile, Eternal is commonly known for his horror core type hip-hop, a sub-genre that is currently lost in hip-hop today, Wu-International catches up with the man to find out how it all started, his Gravediggaz and Marilyn Manson influence, being a part of the KBG, his impressive discography and much more… Enjoy!!