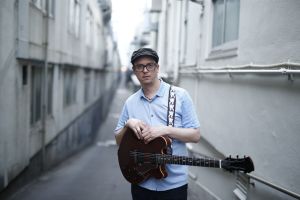 Two performances at 6:30pm and 9pm on both Thursday and Friday nights.
Kurt Rosenwinkel – guitar
Dario Deidda – bass
Mark Whitfield Jr. – drums
“One of the most widely applauded guitarists of the under-50 generation” (Chicago Tribune), Kurt Rosenwinkel presents a revised edition of his standards trio featuring Italian bass virtuoso Dario Deidda and drummer Mark Whitfield Jr. , performing material from his 2009 Word of Mouth album Reflections and new settings of timeless classics.
Kurt Rosenwinkel (born October 28, 1970) is an American jazz guitarist and keyboardist who came to prominence in the 1990s. With a career spanning almost twenty-five years, collaborating with dynamic peers like Brad Mehldau, Brian Blade, Mark Turner, Joshua Redman, Chris Potter; and esteemed jazz elders like Joe Henderson, Paul Motian and Gary Burton, Rosenwinkel’s indelible mark in music is the consummation of being steeped in the rich and deep traditions of jazz, springing off of the shoulders of such vital underpinnings to elevate his own art to new heights, evolving the language in a way no other guitarist has since his arrival.