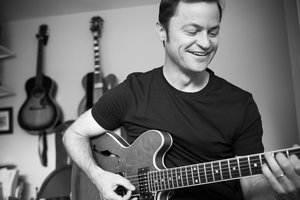 Guitarist Matt Fuller and his trio will be celebrating the musical legacy of the one and only Chet Atkins. Known as “Mr. Guitar,” Atkins’ career as a guitarist and record producer spanned 6 decades, with 88 studio albums,14 Grammys, and countless collaborations, awards and honors. He is credited as being the most recorded solo instrumentals of all time, with his music spanning the realms of country, jazz, classical and pop. Influenced by the finger-picking style of Merle Travis, and guitar greats like Django Reinhardt, George Barnes & Les Paul, Atkins developed a unique solo style, and remains an influential force for musicians across many genres today.

The Matt Fuller Trio (Greg Garrison on bass and Dru Heller on drums) will be exploring their own interpretations of some of Atkins’ recordings and will be honoring his distinctive style while bringing their own sensibilities to the music. There’s a little something for everyone in the music of Chet Atkins!