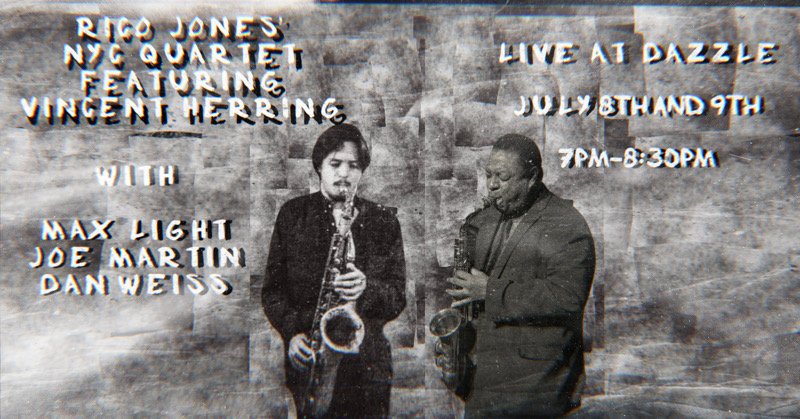 Young composer and musician Rico Jones comes home to Denver, bringing along four highly acclaimed jazz stars from New York to play at Dazzle for two nights, July 8th and 9th, featuring the NYC band. With a quintet comprising both well-established and rising stars. Rico welcomes the chance to introduce Denver audiences to current trends in New York jazz while also introducing the NY artists to the burgeoning jazz scene here in Colorado.

Rico Jones is steadily becoming one of the top young saxophonists of his generation. Raised in Denver, he studied at Denver School of the Arts and with the Colorado Conservatory for Jazz Arts (CCJA) with the guidance of such local artists as Paul Romaine, Greg Gisbert, Eric Gunnison, Art Lande, Brad Goode and Vlad Girshevich. He headed for New York City for his undergraduate and graduate works at the Manhattan School of Music, where he has earned a remarkable six Downbeat student awards. While in New York, he has performed as a leader with such notable artists as Jeff “Tain” Watts, Bobby Watson, Yasushi Nakamura, Ari Hoenig, Lage Lund, Kush Abadey, Sullivan Fortner, Colin Stranahan, Rick Rosato, Rich Perry, Dave Kikoski, and many others.