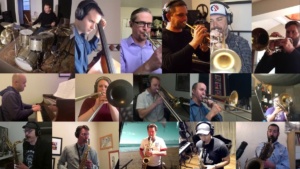 The Ben Markley Big Band was formed in the summer of 2016 and plays Markley’s arrangements as well as his originals. It features musicians from along the front range and has performed with renowned guest artists including Jeff Hamilton, Terell Stafford, and Joel Frahm. The band’s first release was Clockwise: The Music of Cedar Walton on OA2 records. It was recognized as being one of the best 4 star albums of 2017 by DownBeat Magazine. Since then the band has performed at festivals and venues including Dizzy’s Club Coca Cola and the Jazz Education Network National Conference in Dallas. In October 2019 the band started a new project playing some of drummer Ari Hoenig’s music for big band. When the Covid-19 pandemic started Markley arranged a “shelter in place” recording for the band titled ‘Mon Back with the purpose or raising money for artists in need. The band is pleased to premier a new video on Markley’s original 1330 (written in 2016 for Nocturne Jazz and Supper Club) at the Five Points Virtual Festival.

Jazz pianist, Markley has performed with Brian Lynch, Greg Osby, Eddie Henderson, Terell Stafford, and George Garzone. Markley’s latest recording project, Clockwise, has received great critical acclaim and was selected as one of the best 4 star rated albums of 2017 by DownBeat magazine. Markley is active as a composer and arranger, and has been recently commissioned to arrange for the Jazz Orchestra of Philadelphia and Wyoming Jazz Educators All-State Jazz Band. Compositions from Markleyʼs first two albums have earned him ASCAP Young Jazz Composers Awards. Markley was selected to participate in the Betty Carter Jazz Ahead program held at the Kennedy Center. Markley is an active performer in the Denver-metropolitan area and along the front range.

He can be seen regularly at in Ft. Collins as part of the Subterranean jazz trio at Ace Gillett’s Lounge. Markley currently serves as Director of Jazz Studies at the University of Wyoming.

Denver Arts & Venues, Rocky Mountain Public Media (RMPBS, KUVO JAZZ and THE DROP) are pleased to present the Five Points Jazz Festival virtually on TV at 6pm, radio kicks off at 8pm and online on all of our platforms in lieu of the annual day-long event in Denver’s historic Five Points neighborhood.

“For nearly 20 years, the Five Points Jazz Festival has celebrated the music, culture and roots of this historic neighborhood,” said Mayor Michael B. Hancock. “The Five Points Jazz Festival is truly in the spirit of Denver’s Cultural vision – bringing accessible and inclusive art, culture and creativity to the people of Denver. Even though we won’t be able to celebrate together in person this year, through this virtual medium, we are able to gather as a music-loving community and connect with people who may not have typically been able to attend.”

The virtual event will be presented as a two-hour, state-wide television broadcast on Rocky Mountain PBS, Saturday, May 16, 6-8p.m., a two-hour radio show on KUVO JAZZ on Saturday, May 16, 8-10p.m., aired on KUVO JAZZ 89.3FM, streaming at kuvo.org, and on-demand video event on ArtsandVenues.com/5PJF. In addition, the two-hour video broadcast will be presented on the Denver Arts & Venues, Rocky Mountain PBS and KUVO social media channels. KUVO JAZZ will play segments from past festivals all day on Saturday, May 16, to celebrate the festivities. RMPBS will rebroadcast the program on May 22, at 8-10p.m.