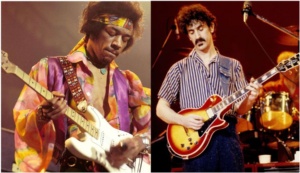 Contemporaries from the 1960s, revered and mythologized, Jimi Hendrix and Frank Zappa traveled very different pathways in pursuit of their singular visions. Hendrix was the sonic astronaut, launching his guitar into sounds unheard of before and since (except perhaps in imitation). He created not one but multiple universes, adept at integrating the blues and R&B of his formative years, the new art form rock with astounding electronic inventiveness all in service to utterly unique vision for how the guitar could sound and what it could make you feel. By all accounts, there wasn’t a time when he wasn’t without his instrument, eager to play with everyone, shy and embarrassed about his singing voice despite its utter soulfulness and rhythm. Sadly, he came of age in a time of excess, one in which he and the people around him could not recognize that his genius needed time to rest, time to write, and time and space to discover his full capacities. Instead, they kept him on the road, urging him to crank out hits, and in the end and in retrospect, he became the literal and proverbial Comet that streaked across the atmosphere. And was no more.

Zappa was a cunning intellectual, attuned to the zeitgeist, properly suspicious of the importance of popular culture, and filled with the right balance of distain and good humor to navigate the beauty and hypocrisy of the world. He chose the most thankless road for a musician, that of a composer, and lived long enough, worked hard enough and was prodigious enough to produce a body of work that rivaled any 20th Century composer from the classical and modern music genres. In fact, had his music been classified as something other than rock, he would have had a far easier and perhaps more lucrative career. Had he not fused incredibly complex charts with extreme silliness and political and social satire, he might have been regarded as an equal to the Stockhausen or Stravinsky. But then he wouldn’t be Frank Zappa. Ever articulate, intelligent and thoughtful, he loved Doo-Wop and the Blues along with experimental animation, scatological humor, and tearing down false idols for fun.

Tune in Sunday, March 21, at 5 pm when The Jazz River takes a second (and still far too short) attempt to represent the wonder of their artistry and make the case for how and why they are truly Beyond Category. Only on KUVO JAZZ.