The film looks at Edward R. Murrow and his confrontation with Senator Joe McCarthy, who was famous for his public claims to know who in elected office and in the public eye were communists and commie-sympathizers.  Set in the late 1950s, this was a time of great concern over the rise of the Soviet Union and Communist China. It was also the start of television news and Murrow was (and probably still is) the gold standard for what role a news organization could play in the public dialogue of the issues of the day.  It is not a biopic about Murrow but instead a look at one of his accomplishments in an historic period of time.  It is also an inside look at the inner working of the news media. 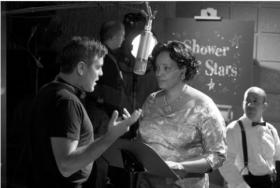 As filmmaker, Clooney goes to great lengths for historic accuracy. All the scenes in the film actually happened. All of Murrow’s speeches are verbatim. And by choosing to shoot in black and white Clooney decided to use actual footage of Senator McCarthy rather than cast an actor to play him.  The movie is essentially about talking heads and it is a credit to the screenwriter and director that they were able to sustain the tension and suspense of people mostly just talking and where many movie goers would still care already knowing in the outcome of the film’s major events.
It has a kind of documentary feel to it with lots of close-up shots and even people talking over each other as in real life. The film also has a stylish look to it. Everyone is in expensive suits, sipping cocktails in off hours and the ever-present cigarette smoke hanging in the air in every scene. That style is something today people associate with the TV show “Mad Men.” This film pre-dates that show by one year.
And of course, to further set the mood of the time there is Jazz.
Dianne Reeves is seen singing in the same CBS studio 58 where Murrow’s show aired also aired the program The 7 Lively Arts that included the Sound of Jazz in one episode, arguably the finest film ever made on jazz and one we’ll profile in the near future.  At that time it was typical for Murrow’s show “See It Now” to share the same studio as a variety show (“Shower of Stars”).  When the news was not being produced and aired, the variety acts would be on rehearsing.
All the music in “Good Night and Good Luck” is performed live with only one or two takes and Reeves’ performances are only music in the film. The majority of the soundtrack to the film is silence, another deliberate choice by Clooney to provide added weight and tension to the spoken words.
Making “Good Night and Good Luck” has deep personal roots for Clooney. His father Nick was a long-time local new anchor and television host in Cincinnati and other cities and Murrow was a hero of his. Also, as many may know Rosemary Clooney was George’s aunt. He chose Alan Sviridoff, her long-time manager and producer to be the film’s music director. The tunes selected were many that Rosemary Clooney sang. The soundtrack won a Grammy for best jazz vocal album in 2006 –the fourth such award for Diane Reeves.
Released in 2005 at the height of the war in Iraq, a lot has been made of whether this film was an indictment of the Bush-Cheney years and the Patriot Act’s anti –Muslim similarities to McCarthy’s Anti-Communist crusade. Clooney wisely leaves that to the viewers to draw their own conclusions.
In the DVD commentary Clooney sums up the film by saying:
“It is important to have conversations about people who were uncompromising because everyone seems to be compromising now. The truth is that there couldn’t be another Edward R. Murrow. [Walter] Cronkite was the last anchor who had any power to shape public opinion.  That wouldn’t happen now because everything is so fractured nowadays. But wouldn’t it be nice to have 10 guys who’d say that we’re not going to show car chases because that’s not news. And so Murrow’s legacy is for those young kids in journalism school who see this film and say that’s who I want to be. It’s fun to represented by people performing at their best. I’m always the guy in the car driving home saying ‘this is what I should have said,’ but Murrow the guy who did it right then and there.”
It is a film about passionate people standing up for what was right.  And it includes a soundtrack of jazz standards and tunes with their own strong and hopeful message.
To see more, visit KUVO .