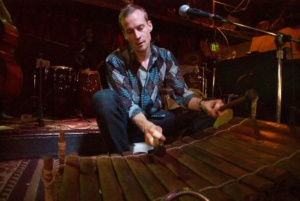 Over my years listening to live jazz in Denver, I’ve heard Greg Harris a number of times playing the vibraphone and always enjoyed his playing. I thought it would be nice to spotlight him, having never featured a vibes player before. The man I met, though, turned out to be so much more than the jazz vibes player I anticipated. Hang onto your hat as you read through this article! Greg plays guitar, vibes and marimbas and such, drums of all kinds, and has no limits on his musical styles: jazz, R&B, soul, funk, bluegrass. He’s as well rounded as they come!

Greg began his music studies with guitar lessons at about age 10 or 11. He continued studying guitar through college and earned his BA degree in Music Education and Music Performance at Fort Lewis College in Durango.

He would go to bluegrass festivals and held Pete Wernick as a hero when Wernick headed up the group Hot Rize. Hold that thought, because this name is coming up again.

Greg continued his music education at UC Boulder, where he earned a Master of Music in music performance and percussion. It may have been during his tenure here when he picked up the vibes, but he also had quite an opportunity at that time. An African scholar, Kwasi Ampene, became Greg’s mentor and brought him to West Africa for an entire summer. Greg learned Kpan Logo (drums), Gyil (a xylophone), Dundun (drums), Kalimba, and more; and he came to recognize African music as the roots of all music.

Greg went on then to earn his Doctorate in music, studying with Jeff Jenkins and Doug Walter at University of Colorado. He wrote his thesis on the compositions of Bobby Hutcherson and was able to access Hutcherson’s handwritten charts for Blue Note, complete with his marginal notations. Greg was moved deeply by this opportunity.

One day while working as a professional vibes player, he got a phone call that boggled his mind. The caller was Pete Wernick, who was looking for a vibes player to come to Ireland with his bluegrass group Flexigrass. The hero of Greg’s youth was calling! He went, then became a part of this group and continues with them today, 18 years later, playing 8 to 10 gigs a year with them. If you haven’t heard this group, stream “Pete Wernick & Flexigrass” and give a listen. You’ll have fun! 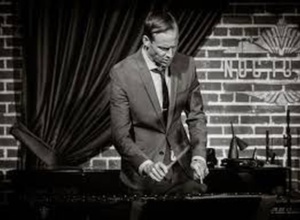 Greg has 5 CDs out in his name: With the Greg Harris Vibes Quintet, “Glass Gold,” “Frames” (recorded live), “Memory of Pilots” (featuring Ron Miles), and “Open Space.” In addition, he has “World Citizen” with West African master xylophonist Aaron Bebe Sukura. His most recent projects, though, must be streamed. One is an EP, “This Western Front,” with Matt Fuller, Neil Hemphill, John Grigsby, Jeremy Averitt; and he wrote all the music for “Cloud House – Nuit Blanche.”

Greg is a jazz, soul, funk, and R&B pianist, and he was a regular with SuperCollider, too. Greg has played piano all over Europe and drums in Africa. He is a member of the 9th & Lincoln Orchestra. Locally, he is called to play vibes for many combos in all the area jazz clubs.

With all that going on, he has been teaching jazz and percussion for ten years at the Denver School of the Arts and is the piano professor at Red Rocks. At University of Colorado Denver, he teaches music production and drum sets. He teaches at Rocky Ridge Music Center and with CCJA as well. As much pleasure as he gets when performing, Greg says his greatest satisfaction comes from teaching young people. He just loves seeing them come alive and really connect with the music.

Greg chooses to stay in Colorado for the richness of the music scene here, the teaching, and his pure love of Colorado. He has hiked the entire Colorado trail and feels so lucky to have been able to get his education and grow his career here.

He recently recorded “Away From Home” with Gonzalo Teppa, who he considers one of the world’s greats and adds that he has learned so much from Gonzalo. This CD is getting lots of much deserved airplay on KUVO. Even with Covid restrictions, he can be seen streaming with Gonzalo and others. Watch for these!