GUITAR: The Instrument that Rocked the World, now at the Denver Museum of Nature and Science. Tickets at dmns.org.

As Colorado’s music scene has exploded over the past few years, one of its mainstays has been Wendy Woo. Her energetic personality, musical skills, and spirited songwriting have made her a media and fan favorite. The Wendy Woo Band is a Colorado favorite. WWB is a poly-ethnic, power pop, song-rock, 6 piece band with sweet vocal harmonies and shuddering grooves.

Wendy has performed at top venues across the country including the Fox Theater and Red Rocks in Colorado, the Bitter End and the Living Room in New York, the Hotel Cafe in Los Angles, the Bluebird Café in Nashville, Sweetwater in Mill Valley, and Eddie’s Attic in Decatur, Georgia. Anticipating the rise of the independent artist, Woo formed her own corporation, Woo Music. Through that, she runs her own record label (13 projects to date), publishing company, booking agency, and management company. 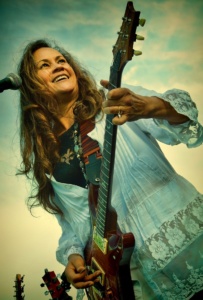 Wendy Woo has led anything but a “normal” life, which separates her from the average performer. As the daughter of bohemian parents who were founding faculty members at Naropa University in Boulder Colorado, her childhood home was a truly eclectic social center. Influential Beat writers such as Allen Ginsberg, William S. Burroughs, and Ken Kesey would be regulars in the living room!

This unusual setting helped develop Wendy into an emotive singer as a child. She started playing the guitar just so she could provide her own accompaniment. After mastering the guitar, she began writing songs and performing in songwriting circles. She attended both the University of New Mexico and the University of Colorado, where she studied a variety of musical genres, theory, and composition. Her many musical influences include everyone from folk chanteuse Suzanne Vega to the legendary Paul Simon. The trademark blended rhythms in Simon’s music inspired her to add similar complexity to her own compositions.

With this in mind, Wendy developed a technique she calls “Slaptap,” a method of creating a captivating visual and percussive backdrop using the guitar body and fretboard. More on Wendy Woo.