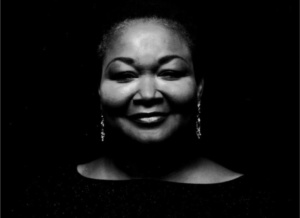 Hazel Miller joins us for the Five Points Jazz Festival – on Saturday, May 16.

For more than three decades Hazel Miller has been a sought after performer in Colorado, and has a reputation of “Bringing it!” Her powerful voice will be ever present at this year’s Five Points Jazz Festival 2020 – the virtual event on Saturday, May16!

Denver Arts & Venues, Rocky Mountain Public Media (RMPBS, KUVO JAZZ and THE DROP) are pleased to present the Five Points Jazz Festival virtually on TV at 6pm, radio kicks off at 8pm and online on all of our platforms in lieu of the annual day-long event in Denver’s historic Five Points neighborhood.

Hazel Miller is not just a great singer, “She is a force of nature!”

Born in Louisville, Hazel Miller was greatly influenced by Nancy Wilson and Aretha Franklin. After performing around Louisville and mixing blues and jazz with gospel and soul, people began to take notice. Her first big break happened in 1982, when she recording the official song for the city of Louisville. In 1984, she attempted to relocate with her two children to Los Angeles to further her musical career. But her rental truck broke down in Denver, Colorado, where she stayed. Hooking up with Big Head Todd & The Monsters, Hazel Miller became a regular part of the band’s lineup and toured throughout the world. In 1992, she released her debut effort Finally, a cassette which contained covers of John Lennon and Otis Redding songs. In 1995, Miller released Live At The Fox and was voted “Best Blues/R’n’B Band” in the Westword Readers’ Poll three consecutive years. Having opened for Herbie Hancock, Bob Weir, Buddy Guy, Mel Torme, James Taylor and Julian Lennon among others, Miller released I’m Still Looking in 2000. She has also performed for United States soldiers overseas and starred in The Vagina Monologues.

“For nearly 20 years, the Five Points Jazz Festival has celebrated the music, culture and roots of this historic neighborhood,” said Mayor Michael B. Hancock. “The Five Points Jazz Festival is truly in the spirit of Denver’s Cultural vision – bringing accessible and inclusive art, culture and creativity to the people of Denver. Even though we won’t be able to celebrate together in person this year, through this virtual medium, we are able to gather as a music-loving community and connect with people who may not have typically been able to attend.”

The virtual event will be presented as a two-hour, state-wide television broadcast on Rocky Mountain PBS, Saturday, May 16, 6-8p.m., a two-hour radio show on KUVO JAZZ on Saturday, May 16, 8-10p.m., aired on KUVO JAZZ 89.3FM, streaming at kuvo.org, and on-demand video event on ArtsandVenues.com/5PJF. In addition, the two-hour video broadcast will be presented on the Denver Arts & Venues, Rocky Mountain PBS and KUVO social media channels. KUVO JAZZ will play segments from past festivals all day on Saturday, May 16, to celebrate the festivities. RMPBS will rebroadcast the program on May 22, at 8-10p.m.