Here in Denver, “The Bronze Buckaroo” has a star on the Walk of Fame along the entrance walk at The Black American West Museum and Heritage Center.  Herb Jeffries  was born in Detroit to a racially mixed couple, referring to himself in a 2004 interview with The Oklahoman as “an Italian-looking mongrel with a percentage of Ethiopian blood, which enabled me to get work with Black orchestras.”
He sang with the Earl “Fatha” Hines  and Duke Ellington Orchestras, scoring his biggest hit Flamingo with the latter.  Raymond Strait, who worked with Jeffries on his not-yet-published autobiography titled “Color of Love.” said Jeffries recently had several surgeries that “just wore him out.”  Herb Jeffries “believed in one world and one people and was one of the most generous people I’ve ever met. He was always funding something or doing something for kids.”
Mr. Jeffries is survived by his fifth wife, Savannah; three daughters; and two sons. 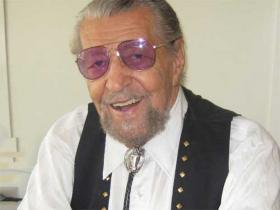