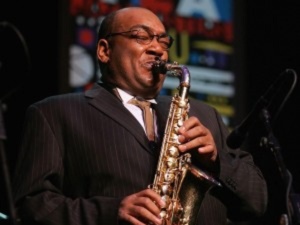 I write to you with a very heavy heart. We have lost one of the original members of our Jazz Family. Jeff Clayton has passed away, following a long and valiant struggle with cancer.

Jeff’s contributions to this organization are so important and so far reaching that I hardly know where to start, so I will start at the beginning.

The first time I met Jeff was in 1995 when he came to the inaugural Vail Jazz Party.  As a novice event producer, I only knew Jeff from the perspective of being a jazz fan, but that all changed that magical weekend when his beautiful tone on his saxophone and his openness and loving nature captivated me and all of our audience and I knew that I wanted to get to know Jeff better and hoped that one day we would become friends.  Over time we did become close friends, for as I got to know Jeff better, I realized how caring, loving and selfless he was and our friendship blossomed and grew.

For a quarter century, Jeff annually returned to Vail to perform, with some time out when he was invited by James Morrison to teach in Australia and recently when he became too ill to participate, and during this time, he helped to greatly expand the Vail Jazz family.  When I think back to the countless hours of performances that Jeff shared with our audiences over the decades, I realize that we all have been blessed to have had in our midst one of greatest voices on the alto sax in jazz history. Recently, I was listening to some recordings of Jeff and was once again reminded that not only was his “sound” so special, but he was a gifted composer as well. Hopefully, in the not too distant future, we can all come together to honor his memory in a performance that will feature his many great compositions.

The second year of the Festival, Jeff joined brother John, Bill Cunliffe and Jeff Hamilton to become the first instructors of the Vail Jazz Workshop and the following year Terell Stafford joined the team. Year after year Jeff returned to Vail to not only perform but to teach and mentor the next generation of young jazz musicians. Always willing to share his knowledge, wisdom and passion for the music, he inspired many of the current young players on the scene today, including Tia Fuller, Tim Green, Erica Von Kleist, Greg Ward, Lakecia Benjamin, Eddie Barbash, Owen Broder, Hailey Niswanger, Chad Lefkowitz-Brown, Grace Kelly, Braxton Cook, Patrick Bartley and Morgan Guerin, to name just a few.

In 2018 DownBeat awarded Vail Jazz its annual award for excellence in jazz education in recognition of the accomplishments of the Workshop, which Jeff was such an important part of.

When we began to regularly present our Sunday Gospel show over Labor Day weekend each year, Jeff became the lay pastor who brought the spirit of love and kinship to our Jazz Family “congregation,” no matter what their faith was. His passion and sense of inclusiveness engulfed us all and illuminated the path to brotherhood and sisterhood, that still inspires me. I believe many of you, who over the years were fortunate enough to have been touched by his music and words, feel the same. Who amongst us all, cannot remember his warm greetings from the stage, delivered with a sly smile when he was about to share an insider’s view into the music, that was always so tastefully delivered. Whether it was a luscious ballad, a burning bebop anthem or a down and dirty blues Jeff always gave everything he had to serve the music and to entertain our family.

I know that we have all been the beneficiary of his remarkable talent, his spirit and his love, and I am so grateful that our friend shared these gifts with Vail Jazz and our family. Jeff will surely be missed, but he will never be forgotten.