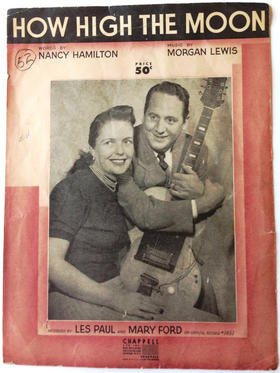 “How High the Moon” was composed by Morgan Lewis with lyrics by Nancy Hamilton. The tune made its Broadway debut in 1940, performed by Alfred Drake and Frances Comstock for the revue Two for the Show.

The show was set in wartime London and ran at the Booth Theater for 124 performances. It was one of the many collaborations between Lewis and Hamilton. Other titles in their repertoire include One for the Money and Three to Get Ready.

A few weeks after the debut of the show, Benny Goodman released his recording of “How High the Moon,” featuring vocalist Helen Forrest. This version rose to #6 on the top charts.

In 1951, Les Paul and wife Mary Ford released a recording of “How High the Moon,” which they produced using multi-track tape recorder to overdub the guitar and vocals. This was a new sound in the industry, and their recording reached #1 on the charts, where it remained for nine weeks. This became Paul and Ford’s second million-selling recording of the year.

Paul is considered a pioneer in multi-track recording, and is also immortalized in his collaboration with Gibson Guitar Corporation to create the eponymous “Les Paul” electric guitar model.

“How High the Moon” is often associated with Ella Fitzgerald, whose versions of the tune are legendary. One of the most popular was her 1947 recording with Dizzy Gillespie’s big band, in which she plays with the lyrics and performs a scat solo.  Fitzgerald’s recording of the song for her 1960 album Ella in Berlin was inducted into the Grammy Hall of Fame in 2002.

While the original tune was composed as a ballad, in later versions it was almost always performed as an up-beat song. It has garnered unofficial titles like “the bop hymn.”

In the 1997 Songwriters Hall of Fame induction ceremony, “How High the Moon” was received the “Towering Song” award, which is reserved for compositions that span generations and are a mainstay in popular culture.

The chords of this tune have inspired other popular bop songs like Charlie Parker’s “Ornithology,” which is often referenced in performances of “How High the Moon” by artists like Fitzgerald.

The compositions has appeared in films like Casino (1995) and Mona Lisa Smile (2003). It’s even featured in an episode of The Muppet Show.