“How High the Moon” | Stories of Standards

“How High the Moon”, by Morgan Lewis, with lyrics by Nancy Hamilton, was introduced in the Broadway revue “Two for the Road” in 1940. Shortly thereafter Benny Goodman’s recording with Helen Forrest as vocalist went to #6 on the charts and the song has been popular ever since, for a time considered as possibly the song most recorded by jazz musicians. Les Paul and Mary Ford’s 1951 recording went to #1 and stayed there for 9 weeks. This was one of the early examples of using a multi-track tape recorder to overdub the guitar and vocals and created an enormous depth of sound for two people.

Over the years “How High the Moon”, first written as a slow ballad, has been recorded in many musical styles. Ella Fitzgerald made it one of her signature songs, along with “Oh, Lady Be Good”, recording it more than 15 times, first in 1947. Her version of “How High the Moon” on her 1960 album “Ella in Berlin” was inducted into the Grammy Hall of Fame in 2002. Ballad, bebop, scat and swing recordings have all been tremendously popular.

Morgan Lewis (1906 – 1968) began work as a composer and choreography after graduating from college. By the 1930s he had worked with Arthur Schwartz, Howard Dietz and E. Y. “Yip” Harburg before going on to directing dance and film with a series of movies. His collaboration with Nancy Hamilton began with “New Faces of 1934”, then continued with a series of three Broadway revues – “One For the Money” (1939), “Two for the Show” (1940) and “Three to Make Ready” (1946). While other songs enjoyed modest success, “How High the Moon” topped the charts and went on to receive the Towering Song Award from the National Academy of Popular Music/Songwriters Hall of Fame in 1997.

Nancy Hamilton (1908 – 1985) excelled in a wide array of field, achieving renown as an actress, singer, lyricist, writer, producer and film director. Educated at Smith College and the Sorbonne, she acted in “The Warrior’s Husband” (1932), “New Faces of 1934” and “Pride and Prejudice” (1935). Her collaboration with Morgan Lewis produced a series of popular songs and she also wrote material for some of the best-known actors and actresses of the time, including Mary Martin, Beatrice Lillie and Cyril Ritchard. Her 1938 play “Return Engagement”, written with James L. Shute, was adapted into the film “Fools for Scandal”. In 1954 she directed “The Unconquered”, which won the 1955 Academy Award for best documentary. The score for this biography of Helen Keller was written by Morgan Lewis. 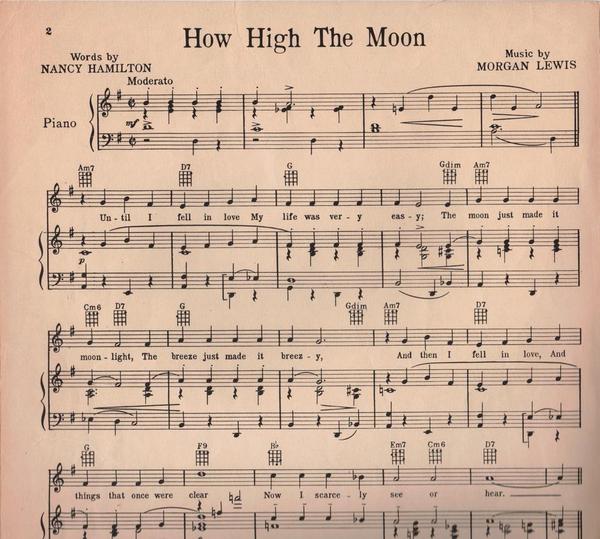