“I’ll Remember April”  was written in 1941 by Gene de Paul, Patricia Johnston and Don Raye for the Abbott & Costello movie “Ride ‘Em Cowboy”, an extremely unusual venue for what would become a jazz standard. Dick Foran, playing an author, sings “I’ll Remember April” to Anne Gwynne (the rancher’s daughter). Another high point of the film was Ella Fitzgerald singing “A Tisket A Tasket” and joining in another de Paul and Raye song “Rockin’ and Reelin’”.

With unusually extended passages, the song did only moderately well until adopted as a bop tune in the late 1940s, with Bud Powell’s and Charlie Parker’s recordings drawing a great deal of attention. Over 50 exceptionally fine recordings have followed and the song has been included in several films (including Charlie Parker’s recording in the 1986 film “The Color of Money”). and two episodes of the Sopranos, both with Bobby Darin recordings.

Gene de Paul (1919-1988) started as a piano teacher, then continued first as a pianist, then as a singer/arranger, then as composer for film scores as well as a large number of independent songs. Frequently collaborating with Don Raye, their works included scores for “A Song is Born” (1948) and “Seven Brides for Seven Brothers” (1954) and “Boogie Woogie Bugle Boy” (1941). With Johnny Mercer he composed music for the Broadway musical “L’il Abner” (1956).

Don Raye (1909-1985) was a championship Charleston and Black Bottom dancer when still a teenager. From there he went into vaudeville as a singer and dancer, detoured into advertising and literature, then returned to music. Best known for boogie-woogie numbers, some of which became rock and roll standards (“Down the Road a Piece” 1941), he was inducted into the Songwriters Hall of Fame in 1985.

Patricia Johnston was known as a pianist, lyricist, composer, musical director and friend of Don Raye, with whom she wrote the lyrics to “I’ll Remember April”. She is also believed to be the inspiration for the song. Very little else is known about her. 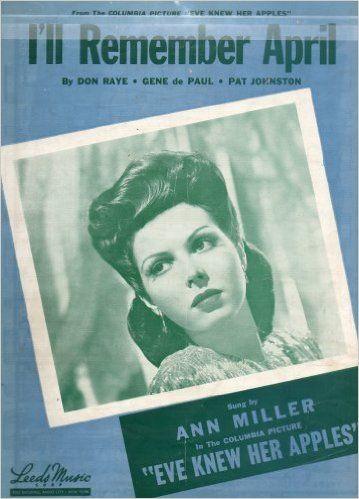