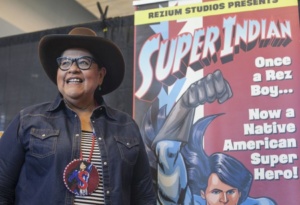 Tune in on Sunday, May 3 at 7am when InDigitNess hosts air an interview with Arigon Starr, creator of the Super Indian comic books. The interview is from last summer during the Indigenous Pop X convention in Denver.

Starr is a member of the Kickapoo Tribe of Oklahoma and was raised in various cities across the U.S. with her Navy family. She’s produced cartoons, drawings and artwork for many organizations including Native Voices at the Autry, the Native Voice One Radio Service, rock group Queen, the Walt Disney Company (for their retail outlets), the National Park Service and other charitable groups around the U.S. She has released four music CDs, written many stage plays, created the comic superhero Super Indian and uses her storytelling talents to highlight contemporary Native America.

Su Teatro’s 'Chicanos Sing the Blues" Returns to the Stage