“It’s You or No One” | Stories of Standards

“It’s You or No One” (1948) Jule Styne and Sammy Cahn was written for the Warner Brothers movie “Romance on the High Seas”, where Doris Day sang the first release. A romantic comedy, the film revolved around mistaken identities.

When about 5 years old Jule (pronounced Joo-lee) Styne (1905-1994) saw Harry Lauder in performance, whereupon he jumped on the stage and started dancing; Lauder recommended musical training. A child prodigy on the piano, he played with several orchestras before he was 12 years old. Unfortunately, his hands were too small to continue as a pianist; by 1926 he had joined the Ben Pollack Band, absorbing jazz and beginning his career as a composer. The band he formed in 1932 backed performers such as Fanny Brice; in 1937 he went to Hollywood as a vocal coach and began his partnership with Sammy Cahn in the 1940s. In the late 1940s his Broadway career began, with hits such as “High Button Shoes” (1947), “Gentlemen Prefer Blondes” (1949, featuring “Diamonds Are a Girl’s Best Friend”), “Peter Pan” (1954), “Gypsy” (1959) and “Funny Girl” (1964).

Sammy Cahn (1913-1993) was born in New York City to Jewish immigrants from Polish Galicia; he played violin in Bar Mitzvah bands and began writing music with fellow band member Saul Chaplin. Their adaptation of “Bei Mir Bist Du Shon” became a hit for the Andrews Sister and the two songwriters were on their way. They went to Hollywood in 1940, parted ways, and Cahn started his partnership with Jule Styne in 1942. Cahn was nominated for more than 30 Oscars, won four, became a member of the Songwriters Hall of Fame in 1972 and took over as president at his friend Johnny Mercer’s request when Mercer had become ill. Frank Sinatra recorded 89 of Sammy Cahn’s songs, many of them more than once. 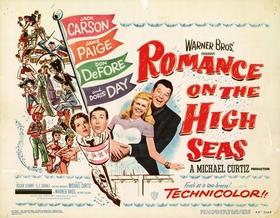