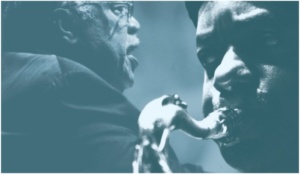 Les McCann and Eddie Harris were as unlikely a pair of collaborators as you could imagine. Les and Eddie, while not opposites had very different approaches to their lives and music. Eddie Harris had a disciplined studious philosophy while Les McCann’s was far more casual and off the cuff.

Montreux Jazz Festival, Switzerland on the Lake Geneva shoreline June 1969. The Eddie Harris Quartet and The Les McCann Trio had performances that were the talk of the Festival. Unplanned and unrehearsed McCann and Harris wanted to play together and arrangements were made for a walk off appearance on the last night.

Lightning in a bottle….scarce and highly sought after but rarely accomplished. The June 21st, 1969 closing act at Montreux was just such a bright moment. Starting with a Gene McDaniels song that Les had recorded in 1966 (as a ballad!) and that Roberta Flack had recorded on her first album (which was released the day before 6/20/1969).

“Compared to What” a show stopper to start the show!

Les and Eddie had expatriate trumpeter Benny Bailey as a secret weapon. Benny’s soaring horn proved to be a surprise for the rapt audience his fiery dynamics proved to be like throwing gasoline on the fire. A Grammy and a Gold record were the result. The album is a standard of live performance now. Swiss Movement put the Montreux Festival on the map.

Two years later Second Movement appeared.
Critically acclaimed and beloved by peers, it is great in it’s own way but didn’t sell like the first album.
Nonetheless it influenced a subsequent generation of musicians melding Jazz and Funk.

Recorded at the iconic Atlantic Studios in New York City The recording is far more mapped out than Swiss Movement and there is more organized disciplined playing throughout.
More Funk than Fusion and still two of the music’s more catchy melodicists contributing compositions.
Eddie is on fire! McCann is pure funkiness!
However, it is not lightning in a bottle.
It Is fire though and “Shorty Rides Again” and ” Set Us Free” are EPIC cuts!
Two Movements flip sides of a coin.
Both great collaborations.