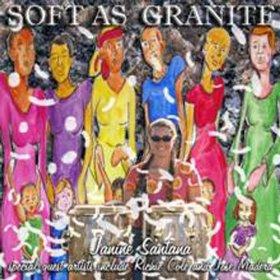 Janine Santana, a Latin Jazz percussionist, has been performing and broadcasting music on the Colorado Front Range for twenty years, after having been raised in the locales Brooklyn, New York, and Trenton, New Jersey. In the East she developed skills as a theater actor, but in the Denver area she has been concentrating on music recording and broadcasting. Janine describes her ambitious current project as “featuring a plethora of musicians . . . including such luminaries as Jose’ Madera, David Amram, Ricky Gonzalez, Ray Vega, Richie Cole, and Luques Curtis.” Listen to her 2008 release entitled Soft as Granite for evidence of her accomplishments as a project leader, arranger, percussionist, and studio artist. In addition, Janine has appeared on over twenty recordings as a side-musician. Recently, Janine and I were able to complete this interview via email messaging.

PF. You go into the KUVO studio to work as an on-air host. Or, you take the performance stage to do a set of music. Describe the similarities and differences.

JS. There is always mental, physical, and emotional preparation before going on-stage or live on-air. All personal distractions and worries need to be put away so that I am completely present and accountable for the audience and fully present for myself for the mental and physical task at hand. Relaxation is really important in both cases. I have to feel I am giving my best and most creative self to the audience, or I myself cannot be comfortable doing the job. If I am not comfortable enough to be secure, I already know my audience will also get uncomfortable.

One huge difference is that on KUVO I can’t see the audience. At first I could not actually feel their presence because I have so many years as a live performance person both in theater and music settings. It really freaked me out trying to wrap my head around the fact that there were live people listening to what I was presenting as a radio host because I was in the studio all by myself—talking to my reflection in the booth window. Now, I enjoy it immensely because I know the people are just on the other side of the computer stream or air frequency. Live music is easier for me because I am making the music in conjunction with other live people on an instrument that is second nature. For radio, there was a learning curve in running a soundboard, typing into a live playlist, hitting the right buttons at the right time, and remembering what I played; and, what I played was someone else’s prerecorded music. It’s not the same!

PF. How do you approach selecting a combination of two or three tunes to play for a set of music? On stage, do you have preferences for what you play first? Are you after a theme in a set?

JS. I’m a complete nut! Yes, I put a lot of thought into a set either way; then, I frequently throw out the intellectual plan and go with what “feels” right. Recording musicians will tell you—when I get a fresh idea in the studio I will change things up right away. I pick guys I know are used to my wild style—disciplined and academic musicians would be driven to madness (laughter here). I am a very spontaneous person and, as a performer, have learned that my creative instincts and impulses are frequently more trustworthy than my intellect is. Having said that, I will find a theme as I’m going and run with it; it can be anything from food, or lust, to the color red. If I’m given a theme—like a time period or a political idea, I can run with that, too. What I play first on stage is probably going to be a hard-hitter to open the energy. But, on radio, it depends on what the deejay before me played, or some preconceived set that had been thought out.

PF. What do you do to distinguish yourself from the other on-air hosts? Do you strive for an on-air radio personality?

JS. I don’t really do anything. My personality on-air is really who I am, but without the airing of my own struggles. (On-air host) Carlos (Lando) once told me not to ever worry about that. Work on learning how to do all of the necessary techie stuff when hosting a show until it becomes second nature; then, personality differences will peep out anyway. I’d say never force it–anyone with an ear would know immediately.