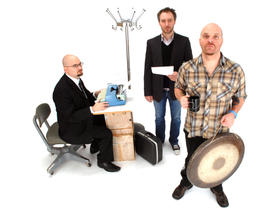 My top pick for this past week was an appearance by the famed clarinetist Don Byron (who also plays tenor and baritone saxophonist). This week, the letter B is still in the top spot when the Bad Plus returns to Dazzle, 930 Lincoln, on Tuesday and Wednesday. The B Plus trio caught the public ear with its first disc in 2001 simply titled The Bad Plus. When the trio (pianist Ethan Iverson, bassist Reid Anderson and drummer David King) performed at the Village Vanguard, the appearance led to a contract with Columbia and the trio’s These Are the Vistas disc.

You might say that the Bad Plus’ appeal rested on three interconnected factors. First, there was the sheer power of the group. Never had a band with conventional, acoustic trio instrumentation created such a potent wall of sound. Second, there was the out-of-the-ordinary choice of material that extended the group’s musical net all the way over to Kurt Cobain. Third, there were creative originals and some solid playing. After, pianist Iverson had played with a different kind of Kurt, guitarist Kurt Rosenwinkel. And the partnership between Iverson and Anderson began with them performing a Monk tune pre-Bad Plus. As the B Plus trio has continued to gain in popularity, Iverson has also kept his piano feet wet playing with a number of noted jazz men, including drummer Albert ‘Tootie” Heath.

The group’s latest release, It’s Hard, is collection of eclectic covers with tunes from Peter Gabriel to Johnny Cash, from Prince to Ornette. In 2015, the group had an attention getting collaboration with saxophonist Joshua Redman. The year before that, the powerhouse trio released a disc of originals (Inevitable Western) along with its take on Stravinsky on the CD The Rite of Spring. In fact, all of the trio’s output (just over a dozen albums) delivers aspects that capture the band’s rise up the ranks. The trio’s sets at Dazzle on Tuesday and Wednesday are at 6:30 and 8:30 p.m. (303-839-5100). To have a chance to hear this band in a small, club setting is a special treat.

Speaking of noted, jazz masters, area-based saxophonist Keith Oxman has received considerable praise from giants such as Curtis Fuller and Benny Golson. On Friday, Oxman is at Dazzle with trio that has Jeff Jenkins on organ and Todd Reid on drums. The group plays at 7 and 9 p.m. Additionally, on Tuesday, Jenkins brings his instrument to Nocturne, 1330 27th part of the Organ Trio Reboot project with guitarist Dan Schwindt at 7 p.m. (303-295-3333).

On Saturday, another saxophonist (and flutist) is at Dazzle. That’s Denver native son Nelson Rangell. Rangell is internationally known for some of his more crossover offerings, but he is a strong player on all his many instruments whatever the context. In New York, he played with the Gil Evans Orchestra; and when he recorded with the GRP Big Band. He more than held his own with all-stars in that aggregation. His working quartet has Eric Gunnison on piano, Bijoux Barbosa on bass and Mike Marlier on drums. The quartet plays at 7 and 9 p.m.

Also at Dazzle this week, the hard-bopping Timber and the Saps quintet plays on Thursday at 7 p.m., young drummer Julian Archer and a trio are on stage on Sunday at 7 p.m. and the Metropolitan Jazz Orchestra with Arvada High School works out on Monday at 7 p.m.

Up in Vail on Thursday, the Vail Jazz Winter Series gets going with reedman/singer Adrian Cunningham bringing Professor Cunningham and His Old School to Ludwig’s Terrace in Vail, 20 Vail Rd., at the Sonnenalp Hotel.  The first set at 6 p.m. is sold out and the second set is at 8:30 p.m. (970-479-6146). The series takes place once a month through April. The April closer event features the Chuchito Valdés Quartet.