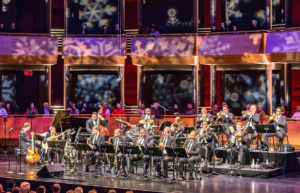 25 Years after Apartheid:
Tuesday, December 24 – 8pm
Jazz Night in America celebrates 25 Years of Democracy in South Africa by focusing on the unknown trailblazers that stayed during the brutal era of apartheid with music by the Jazz at Lincoln Center Orchestra with Wynton Marsalis. The stories of trumpeter Hugh Masekela and pianist Abdullah Ibrahim, the South African icons that left their families to find refuge elsewhere, quickly becoming symbols of the pan African freedom movement, are widely known — but what about the forgotten the musicians that remained on South Africa’s frontlines like Winston Mankunku Ngozi and Moses Taiwa Molelekwa? We tell their stories along with the master bassist Herbie Tsoaeli, who we captured at the Cape Town International Jazz Festival. We also feature one of its rising stars of the “Born Free” generation, Thandi Ntule, who has no recognition of the white nationalist regime.

Holidays with the Hosts: Christmas with Web Host Mindi McNeil

Holidays with the Hosts: Christmas with Debra Gallegos of Canción Mexicana