From the 1950s to the 1980s Atlantic Records turned out the freshest, most cutting edge and soulful records in Jazz, R & B, Rock and Roll, and Pop music. The brain trust of the brothers Ahmet and Neshui Ertegun along with producer Jerry Wexler and engineer Tom Dowd cranked out one classic record after another, hit after hit and made the label Atlantic synonymous with taste and class in their relationships with the artists. Arif Mardin was the fifth member of that group and is the least well-known but no less influential. As arranger and producer Arif earned 10 Grammys and worked with artists as diverse as Sonny Stitt, John Lewis, Laura Nyro, The Young Rascals, Betty Carter, Bette Midler, Hall & Oates, The Bee Gees, Norah Jones and Dianne Reeves, to name just a fraction. 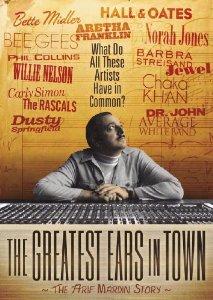 In 2005 he began work on his only third solo album entitled “All My Friends Are Here.” Unlike the first two it was a vocal album revisiting compositions written by Arif, some 50 years earlier and several never recorded before.  The sessions were filmed and while doing it the directors decided to make a film about Arif’s life, “The Greatest Ears in Town – The Arif Mardin Story,” directed by Doug Biro and Joe Mardin (2010). At the time he was also diagnosed with inoperable pancreatic cancer. He was determined to finish the record that he referred to as his “life’s work.”

And what a life he had. The film tells all these stories. He came from an aristocratic family of highly respected statesmen, judges, and civic leaders who traced their ancestry back to Mecca in the 6th century.  His grandfather moved the family to Istanbul. Through his older sister Arif was introduced to jazz at an early age and her premature death inspired him into serious musical study. When Dizzy Gillespie was on a state department tour in the Middle East, Arif met and befriended him and Quincy Jones with whom he shared some of his compositions. Quincy, who was himself still in his 20s, produced three of Arif’s compositions for his work with Voice of America radio and sent a tape of them to the Berklee School of Music recommending Arif as the first recipient of a scholarship in his name in 1957.  Because of his love for big band music, Arif became something of the black sheep of his family and he and his wife gave up the café society of Istanbul and moved to Boston. He taught at Berklee after graduating but at the encouragement of his wife Latife, they moved to New York for him to pursue a life of making music.

His family knew the Erteguns and through his friendship with Neshui Ertegun, Arif was offered a job at Atlantic in 1961. He started doing office management and clerical work even though he was the only trained musician among the staff. His break came when he worked with King Curtis on an awards show and wrote 30 second arrangements of all the winners’ tunes. This caught Jerry Wexler’s attention and for the next 40 years he worked as their in-house arranger and producer, ultimately becoming a Senior Vice President. His first hit arrangement was Brook Benton’s classic “Rainy Night in Georgia” and one of last ones (for Blue Note records) was Norah Jones’ “Come Away With Me.” Unlike other producers who have a heavy hand and personal style (think Phil Spector or many hip-hop producers), Arif had a light touch, a ‘watermark’ behind the production as Lalah Hathaway remarks in the film. He was quoted as saying “there are 2 or 3 bars in every record that are for me, the rest is for the artist.”

The film is built around the recording sessions, with each artist working with Arif to capture his very specific vision for the tune. Many remark that his charts were the most challenging they’ve had to sing with tricky intervals and time signatures.  The film provides the backstory of his life, his great love affair with his wife Latife, herself an accomplished author and playwright. And it is full of testimonies from the many people inside music he affected. Despite all his efforts, Arif Mardin died before the record was completed but the film shows his son Joe in the studio the next day with Darryl Hall to lay down some vocals, putting aside their grief because his father would have wanted the session to continue as planned.

The companion CD to the film is entitled “All My Friends Are Here.” The first track is the film’s title and the only tune not composed by Arif, instead by Bette Midler. It is a swinging and lighthearted look at his career. The CD is one of those late night romantic, turn the lights down and break out the martinis kind of records. Among his many talents, Arif made such a great martini that people took to calling it a Mardini. By all accounts he was a consummate gentleman, fun loving, with a calming authority in the studio, generous with praise and wisdom and of course possessing spectacular ears. This film and the CD reminds us of how brilliance behind the scene may be every bit as essential to what’s up front.

The two songs highlighted in this feature are the title track from the CD All My Friends are Here, and Amy Kohn’s “Dual Blues,” also on the companion CD.