In the early 1960s, a young comic stepped up to the microphone in a Greenwich Village nightclub and instead of offering a predictable run of non-stop jokes a la Rodney Dangerfield he told stories and riffed on personal and social experiences. In another club across town jazz artists did away with traditional head-melody / chorus / head-style of playing and began improvising freely (think Coltrane’s “My Favorite Things”). They also performed completely original and free-flowing compositions. It is not hard to see a natural parallel between the fearless and in-the-moment improvisations of jazz and stand-up comedy. Bill Cosby was one of the first to really understand this relationship. 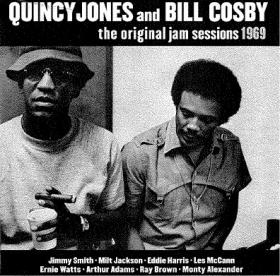 A Philadelphia native, Bill Cosby grew up listening to the modern jazz of his day — Dizzy& Bird, Brubeck, Monk and Bud Powell. He also listened to the dance bands of Illinois Jacquet, Tiny Bradshaw, and Red Prysock. As he tells it, for him jazz was not only for listening pleasure but also was intellectually challenging. It was also for developing a sense of style, fashion and, of course, for getting girls. And girls who knew who Lee Morgan was were more attractive than those who didn’t have a clue. Cosby and his friends would memorize tunes, riffs, and the details of jazz musicians and their records like other youth would do with sports heroes. Early on he fancied himself a drummer and even sat in with folks like Jimmy Smith and Shirley Scott. Check out the hysterical YouTube video of him on the Dick Cavett show explaining one night on the bandstand when Sonny Stitt showed up and dashed his musical aspirations by calling for Cherokee to be played at high speed. He said Max Roach drove him to comedy.

Bill Cosby has been a friend, an ally, and a champion of Jazz from his early beginnings. During the start of his celebrity, he used his stature to bring attention to the musicians and music that came out of the Village Gate Mondays’ “Latin Meets Jazz” where he could sometimes be found playing the cowbell on the side of the stage. His imitations of John Coltrane were so accurate that Trane’s quartet would invite him on stage at Birdland to “play” Coltrane, a complex mimicry of the saxophonist’s crouched stance, mannerisms, fingering, and his actual sound from Cosby’s amazingly accurate scatting.

From “I-Spy” (1965-68) to “The Cosby Show” (1984-92), all of his television shows found ways to feature jazz musicians and their music. Even kids watching his cartoons were exposed to jazz. “Fat Albert Rotunda” was composed and performed by Herbie Hancock. Cosby and Quincy Jones have been friends for more than 50 years. They moved to Hollywood around the same time and collaborated frequently.Cosby himself recorded at least five albums of jazz using some of the finest musicians of the day. Jam sessions from the early “Bill Cosby Show” (in which he played gym teacher Chet Kincaid), recorded in 1969, were not released until 2004, and include his then theme song “Hikky-Burr” and featured musicians such as Jimmy Smith, Eddie Harris, Ray Brown and Monty Alexander. In 1971 he put out Badfoot Brown and the Bunions Funeral and Marching Band, an LP with only two extended full-side tracks much in the style of Miles Davis’ electric period. Cosby wrote in the liner notes that side A – “Martin’s Funeral” was his musical imagining the funeral procession for the fallen civil rights leader. Later albums included covers of great jazz standards with all-star combos.

Betty Carter, Joe Williams, Max Roach, Dizzy Gillespie, Tito Puente, Lena Horne, and Nancy Wilson, among many others, all were guest stars with dramatic roles on the 1980s “Cosby Show.” Each season he had different musicians reinterpret the theme for that show. One year it was Bobby McFerrin, another, Craig Handy, Lester Bowie, even Jr. Walker and His All-Stars. Several episodes of his show had vignettes of him arguing with his wife or friends over the trivia of particular tunes, their labels, and recording dates, further burnishing his jazz fanatic bone fides.

Much of his jazz advocacy is less well known. For more than 30 years he hosted the Playboy Jazz Festival (held at the Hollywood Bowl), recently passing that responsibility on to George Lopez in 2013. He was personally responsible for programming the music that guided the crowds into the festival grounds and settled in for the show. Since 1986 he has been the Honorary Chairman of the Thelonious Monk Institute. He has been awarded a Kennedy Center honor, a Presidential Medal of Freedom, and the Marian Anderson award in recognition of how he helped to change society through the Arts.

Jimmy Cobb, Grover Washington Jr., Don Braden, and Branford Marsalis, among others, have featured compositions written by Cosby on their own albums. He has championed the careers of many jazz musicians especially but not exclusively those coming out of Philadelphia. At a tribute concert to him in Philly in April of 2014, Cosby organized the band to represent “the guys who stayed home and didn’t live on the road” and included pal drummer Mickey Roker, and tenor saxist Bootsie Barnes, a friend from elementary school. Near the end of the performance, to further wow the crowd, he brought on two other saxophonists, Fred Barnes, age 95, and then Max Lucas, age 99. Through an almost seven-decade career he has played on albums, written liner notes, emceed major concerts, lent his name and time to benefits, promoted new and rising stars, and always remembered those who came before. Cosby turns 77 on July 12th. So, Happy Birthday Bill! The jazz world is better off for having you so consistently in their corner.

Music on this feature includes Quincy Jones & Bill Cosby, “Hikky-Burr” on the CD The Original Jam Sessions 1969 and the title track from Bill Cosby and Friends, Where You Lay Your Head.

The clip in this review is from “The Cosby Show,” season 6, episode 10 (1989) “Grampy and NuNu Visit the Huxtables,” featuring Bill Cosby and Nancy Wilson singing “Moody’s Mood for Love.”.