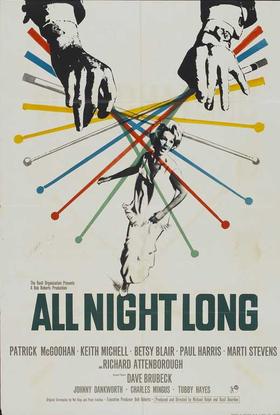 Wealthy entrepreneur and jazz fan Rodney Hamilton, steps into his swank warehouse in London. He is preparing a big surprise party to celebrate the one-year anniversary of African American pianist/bandleader Rex and his British white singer-bride Delilah who recently retired to be his full-time wife. You know the jazz is going to be plentiful when Rodney finds real-life Charles Mingus alone on the bandstand rehearsing. Played by young Richard Attenborough, Rodney is so cool that he exchanges his tuxedo jacket for a cardigan. The band begins to arrive featuring some of Britain’s leading players of the day such as saxophonist John Dankworth. A little later, we see Dave Brubeck. Following right behind is Rex’s drummer Johnny Cousins played by Patrick McGoohan (Secret Agent Man, The Prisoner). As soon as he steps in Johnny begins his nonstop scheming. He has funding to break from Rex and start his own band but only if her can bring Deliah on as the front woman. Thus begins his series of conniving, lies, rumors and playing one person off of another. All the while Johnny pretends that he is looking out for each person’s best interests. It becomes quickly clear that what director Basil Dearden (http://www.imdb.com/name/nm0213136/?ref_=fn_al_nm_1) has done is present a version of Othello set in a 1960s jazz scene with Rex as the brooding Moor, Deliah as Desdemona, Rex’s road manager Cass (Cassio), Johnny wife Emily (Emilia), and of course Johnny as the wicked Iago.

Most of director Basil Dearden’s experience was in the theater. Shot in glorious black and white and exclusively on sets inside Rodney’s warehouse/home, “All Night Long” has the feel of play with its tight close-ups of the cast and the musicians. Dearden made several earlier films that dealt with social themes of homosexuality, race, and class. In this one, the presence of marijuana smoking and issues of race and interracial couples are treated matter-of-factly. That is kind of astonishing for 1962. Both screenwriter Paul Jericho and actress Betsy Blair (Emily) appeared under assumed names as they were blacklisted by the wave of McCarthyism at that time. The film’s language reflects the time too with its mixture of beatnik slang and psychoanalytic jargon that some may find campy but I thought added to the period piece. The drinks are plentiful, the cigarette smoke a constant and the music swells to the forefront and mellows back into the woodwork. A great party is happening while Johnny continues to weave his webs of deceit. Apart from Attenborough and McGoohan, none of the actors really made a name for themselves although Paul Harris as Rex was featured in several well-known Blacksploitation films in the 1970s (“Truck Turner,” “The Mack”).

Often films that feature jazz as the backdrop to the story offer snippets of actual playing and unfinished tunes with actors faking the fingering. “All Night Long” gives you great music throughout the film, fading out for dialogue and then drawing you back to the musicians who jam and play modern jazz throughout the entire film. We’re treated to a full Dave Brubeck tune with the camera panning in and out of his hands and around the other players. We get a moment of rare collaboration between Brubeck and Mingus playing together (Mingus’  Non-Sectarian Blues).  Unlike many films, it appears that those actors as musicians were used in only the most limited ways, with British players Tubby Hayes (vibes, sax) and Bert Courtley (trumpet) among others playing themselves on the bandstand. There was a story that Patrick McGoohan allegedly spent four months in his garage teaching himself to play his three numbers  in the film, Another says that percussionist Alan Ganley performed the actual drum work. Either way, McGoohan is convincing and the music swings from start to finish.

The film does not follow Othello to its true end but [SPOILER ALERT] as Johnny’s lies and schemes unravel in front of everyone and the party ends abruptly, we see McGoohan’s character, rejecting his long-suffering wife, claiming that he doesn’t want to be loved. In the empty warehouse with only Rodney vaguely looking on, Johnny sits alone at his kit and performs a self-loathing drum solo denouement. “All Night Long” is a film that seamlessly blends jazz with its storyline and has something interesting to say on both fronts. It isn’t a classic but among the comparatively few films that try to use jazz creatively, it hits the right notes all night long.

soundtrack music and clip from film “All Night Long”