Jazz on Film: So Square and So Hip

Jack Webb’s iconic character Joe Friday and program ”Dragnet” forever fixed him as the no-nonsense, straight talking and ultra-square cultural figure firmly behind law and order and unmoved by societal changes in the 1950s and 60s. Yet few knew that Webb got his start as a late-night jazz DJ before moving to radio broadcasts and television. He is reputed to have had more than 6,000 jazz records, including everything done by Bix Beiderbecke as well as his love for the modern jazz of the 50s. His first wife was the actor-singer Julie London. He used to entertain friends at home, late at night playing DJ, pouring scotch, and smoking Chesterfields. 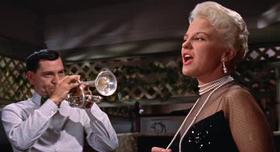 “Pete Kelly’s Blues” (1955)  first appeared as a radio broadcast in 1951 and ran only 13 episodes. It also was a short-lived television series in 1959 starring William Reynolds. The 1955 film version was only Webb’s second film and he not only starred in it but also directed and produced it. The film is a gangster story revolving around a cornet player Pete Kelly (Webb) and his band who are forced to take on a new manager played with menace by Edmond O’Brien and who extorts a 25% commission and foists his girlfriend on the band. In her second film, the first being the Danny Thomas version of the Jazz Singer, Peggy Lee plays a beaten-down and abused alcoholic singer. For her performance she received an Academy Award nomination for best supporting actress. As a clarinetist, Lee Marvin plays Pete Kelly’s best friend who opts out of the band at the first sign of the shakedown. The film also features Janet Leigh as Kelly’s a high society girlfriend, Andy Devine as a detective and fleeting cameo of Jayne Mansfield as a speakeasy cigarette girl.

Set in Kansas City during prohibition the film presents jazz on the cusp between moving from Dixieland to Swing. There are great examples of music throughout the film beginning with a Teddy Bruckner trumpet solo opening the film at a New Orleans funeral and featuring actual musicians playing themselves as Pete Kelly’s Big Seven. Clarinetist Matty Matlock arranged the tunes and ghosts for Lee Marvin’s clarinet and Cornetist Dick Cathcart plays behind Webb’s decent play-fingering.

The film has lots of little touches of humor, especially early with the choreographed vision of how a speakeasy operated. Webb remains true to his actor/character delivering lines in almost Zen-like minimalism with a trademark series of ironic, sometimes cold, cruel and/or glib one-liners. For example, when he is being forced to use Peggy Lee in his band, Kelly replies that, “It’s not that kind of a band. It’s jazz, they come for the noise.”  Or later when Janet Leigh asks him if she can have some of tea he’s making in his room his reply is “You wouldn’t like it. I’m using water.” Unlike William Shatner, Jack Webb could never be accused of overacting. It was a bit of a stretch to see how and why Janet Leigh’s character could be so wholeheartedly in love with Pete Kelly, as little emotional openness he offered back. Maybe his being a musician was enough.

The plot is pretty standard and the resolution predictable but there are scenes that are a lot of fun and contain genuine warmth and wit. The main reason to seek out “Pete Kelly’s Blues” is that the music is terrific. In addition to hearing Peggy Lee sing, we get several great cameos with Ella Fitzgerald (who has some speaking lines too) who performs at a different club. And the band fronted by Pete Kelly provides lots of great swinging music, perhaps enhanced by the fact that Webb cast actual musicians in the roles.

In the late 1950s Warner Brothers gave Webb a deal for 2 LPs. One was called “You’re My Girl: Romantic Reflections by Jack Webb.” Arranged and produced by Billy May, it is pure kitsch with Webb talking à la Telly Savalas over lush orchestration. The second called “Jack Webb presents Pete Kelly Lets His Hair Down” is music from the film, both instrumental and vocal. In 2004 Rhino Records put them out on a collection they called “Just the Tracks Ma’am.” For all the button-downed straight man, conservative crew-cutted, flat affect kind of actor that Webb portrayed on screen and television, “Pete Kelly’s Blues” shows his real love for jazz and for that I for one will count him as one very hip square.