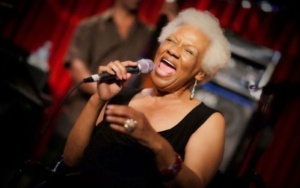 In 1983, when her mother, father, and grandmother all died, she never missed a day of work, she said. “If I hadn’t had singing, I would have lost my mind,” she told The Times in a 1996 interview. “It’s just a lifesaver. I found something I like, that I never get tired of.”

A GoFundMe launched for Morrison in early March, after “she was sent to the hospital with cardiovascular disease,” raised more than $13,000. People who donated described her as “a national treasure” and “a legend.”

Morrison grew up in the Detroit suburbs. Her father was a doo-wop singer, and she sang too through her young years.

After she moved to Los Angeles in 1971 at age 21, steady work with blues great Eddie “Cleanhead” Vinson and performances on “The Johnny Otis Show” grounded Morrison in blues and jazz. “Eddie used to tell me, ‘Get your own sound, girl!’” she told The Times in 2011. “Johnny said, ‘Why are you singin’ like Barbra Streisand? You need to learn your own people’s music!’ ”

“I think I’m a hot blues diva, but I always mix in jazz with the blues,” Morrison

For more than a decade, Morrison performed at Pip’s on La Brea Avenue, a jazz club in Mid-City. On Wednesday, club owner Derrick Pipkin posted a photo of a smiling Morrison and offered his condolences, adding that she had “captivated the hearts of us all.”

“Her soulful voice was only surpassed by her beautiful spirit and radiance. She was the essence of a Sunday Kind of Love,” the post read, referring to the classic Etta James song. “She dedicated her life to being an inspiration not only through her music but through her words of motivation and encouragement.

“Her smile lit up a room and her presence brought a sense of warmth. A mentor, a friend, a legacy. She will be truly missed.”

Morrison also was a staple in Leimert Park Village, where she opened the Barbara Morrison Performing Arts Center as a launching pad for new artists. Later came the California Jazz & Blues Museum, which she opened to educate the community on the region’s prolific jazz performers and to share historical information about California’s influence on the genre.

She also passed on that musical education as an adjunct associate professor of global jazz studies at UCLA. In 2020, UCLA launched the Barbara Morrison Scholarship for Jazz.

Nothing seemed to slow her down, not even losing a leg to diabetes in 2011. It needed to be done to save her life, Morrison told The Times, but “thankfully it doesn’t affect my singing at all.”

Last year, after the verdict was read in the case of Derek Chauvin, the white former Minneapolis police officer convicted of murdering George Floyd, it was Morrison who spread the news to those eating outside or visiting stores in Leimert Park Village. “Guilty on all charges,” she shouted, as she rolled down the sidewalk in her electric wheelchair. She pumped her right fist in the air.

“We are heartbroken to learn of the passing of jazz & blues legend Barbara Morrison,” the Herbie Hancock Institute of Jazz posted on its Twitter page Wednesday afternoon. “She mentored our college program vocalists & many of our students have performed with her. A pillar in the music community, she founded (the Barbara Morrison Performing Arts Center) & California Jazz & Blues Museum in Leimert Park.”

According to the UCLA Herb Alpert School of Music, where she served as an adjunct professor of global jazz studies, she performed at Carnegie Hall, toured Europe with Ray Charles, and sang at the North Sea, Bern, and Playboy jazz festivals.

She began performing at age 10 in Michigan, and over the course of her career appeared on more than 20 recordings, two of which earned Grammy nominations. Her Blue Lady Records was nominated in 1999 as producer of Al McKibbon’s album “Tumbao Para Los Congueros de Mi Vida (For All the Conga Drummers in My Life).”

The Los Angeles Department of Cultural Affairs mourned her passing, calling her an “L.A. treasure.”

Forever in our Hearts: Ellyn Rucker