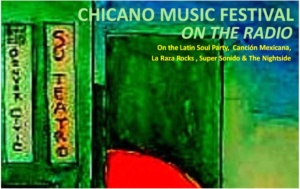 Latin Soul Party at 8pm on Friday, July 24
Danny Valuzuela and Ricky O’ will feature Su Teatro’s longtime contributor Daniel Valdez, who will tell the story of his involvement with the movie ‘La Bamba.’ Danny and Ricky O’ will add in the music versions of the song. In addition, be sure to join the hosts as the honoring Zeke Deleon and his impact on our music community. In the early 70’s Zeke Deleon, Jr fast became a local celebrity; the Deleon Brothers.

Canción Mexicana 9am to 1pm on Sunday, July 26
Yolanda Ortega’s Desde Este Semillas: Raices Musicales (a take on Story on Standards) will give us the music and the history of “Volver Volver.” This ranchera song written in 1976 by songwriter Fernando Maldonado was made popular by Vicente Fernandez. Telling the story of a heartbroken man who accepts the blame in his relationship with the woman he loves and begs her to return. Contributing their stories and the music will be Lorenzo Trujillo and Larry Lovato. Yolanda and Debra Gallegos will recognize Raul Vasquez who passed away earlier this year. Raul will be honored by Su Teatro during this year’s festival.

La Raza Rocks 1pm on Sunday, July 26
Pocho Joe, will play the music and tell the story of one of our communities most popular bands for the Chicano, Hispanic community presenting the history, the and the music of the Mood Express.  A Colorado group honored at Su Teatro’s Chicano Music Hall of Fame.

Super Sonido 4pm on Sunday, July 26
La Molly brings us the future of Chicano music with her take on Colorado artists. These are the people who will be on the stage at the Chicano Music festival in 20 years. They represent roots and modern music put together.

Poetry on The Nightside with Andy O’ 8pm on Sunday, July 26
As a special treat, Anthony Garcia and Bobby LeFebre read poetry, their take on the Chicano Music festival. It’s going to be a fabulous celebration of Su Teatro’s Chicano Music Festival!

Chicano Music and Me
The history of the Chicano Music Festival will be presented by Anthony Garcia throughout the weekend. “The influences come from across the world but have lived here in Colorado for more than 500 years, we call it Chicano Music. It is emotional, and it is danceable,” according to Executive Director Anthony Garcia. Su Teatro kicks off their 24th Annual festival on Wednesday, July 29th with a film screening of La Bamba, followed by a virtual and in-person festival the rest of the weekend. More details on the Chicano Music Festival at Su Teatro.org.