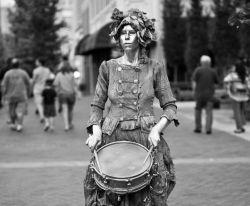 As part of our observance of Women’s History Month, and the Women and Girls Lead initiative, KUVO offers profiles of three ladies who drum.

Terri Lyne Carington: A prodigy who, at age ten,  played with  Dizzy Gillespie, Clark Terry, and Rahsaan Roland Kirk. She received a full scholarship to the Berklee College of of Music when she just 11. Carington’s debut CD release, Real Life, was nominated for a Grammy and received a Grammy for her 2011 release The Mosaic Project, which paired some of the best female vocalists and instrumentalists together to celebrate women in music from vast social and racial circles. Most recently, she produced vocalist Dianne Reeves 2014 CD, Beautiful Life.

Cindy Blackman Santana: Mentored by Art Blakey in the 1980’s, Blackman moves in jazz, funk and rock circles. She has released several straight ahead and jazz fusion albums with the Cindy Blackman Quartet and had a long association with rocker Lenny Kravitz. Her most recent release, 2010’s Another Lifetime  is a tribute to another mentor, the legendary drummer Tony Williams.  In its review, All About Jazz wrote, “Blackman’s sonic explorations take jazz-rock beyond where the late drummer envisioned it when he was putting heads to bed with guitarist John McLaughlin, bassist Jack Bruce and organist Larry Young…Jazz-rock as performed by Williams, and now Blackman, is very much alive and well.”

Kim Thompson: Known as “Beyonce’s drummer”, Thompson is a graduate of the Manhattan School of Music. She toured with Beyonce and her all-female band. She has taught and performed in over 33 countries throughout the world. Since February 2014, Thompson has been the drummer in the house band for the new television program “Late Night with Seth Meyers.” The 8G Band is led by comedian-actor-musician Fred Armisen. The band also includes Les Savy Fav’s guitarist Seth Jabour, bassist Syd Butler and Girls Against Boys keyboardist Eli Janney.

Women and Girls Lead is a major public media initiative focused on women and girls’ issues, connecting citizens in Colorado, across the country and around the world. More  information is available here.