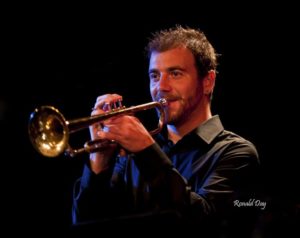 Born in Bridgewater, NJ, Gabriel Mervine began to play professionally at age 13.  Though he was interested in the drums, the band needed trumpets, and thus was this trumpeter created!  He attended the University of Colorado at Boulder for jazz studies but numerous offers for playing gigs drew him into performance, and he followed that path instead.  Mervine plans to one day return to the scholastic side of the music business so he can teach and guide others.  He has studied with professional musicians such as Bobby Shew, Roger Ingram, and Greg Gisbert.   He even spent 5 days visiting the home of Clark Terry and his wife, expanding his skills and enjoying their hospitality.

His musical inspirations and influences are Clifford Brown, Freddie Hubbard, Miles Davis, and Lee Morgan, and, of course, Clark Terry.  Asked who he feels he sounds like, he replies, “I sound like me” and adds that creating his own sound is an important goal.

The list of people he has played with, though too long to expound upon here, includes Natalie Cole, Christian McBride, Chie Imaizumi, Maceo Parker and Roberta Gamborini.  His musical abilities and interests are wide, and he explores all genres.   He leads his own groups with whom he creates modern, original works.  For the past 8 years, he has been active with Motet, an American funk, Afrobeat and jazz-influenced group. He will soon be doing West Side Story with the Boulder Philharmonic and has even recorded with the students and faculty of the Casablanca Music Center in Morocco.

Three Gabriel Mervine-led CDs are available.  He carries them to all his gigs, and they are carried at Twist & Shout and other local music stores.  On Amazon, individual tunes can be downloaded.  The CDs are named People, Places, and Things.

Locally, he can be enjoyed at the Meadowlark jam sessions on the first and third Mondays of every month; at Ace Gillett in Fort Collins; and every Tuesday starting at 7 p.m. at Spangalang Brewery on Welton Street with a particularly exciting group.  You really have to go and hear this!  As Susan Gatschet of KUVO says, “Support Live Music!” 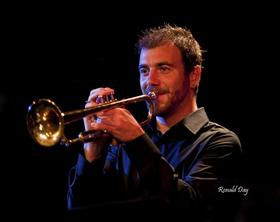