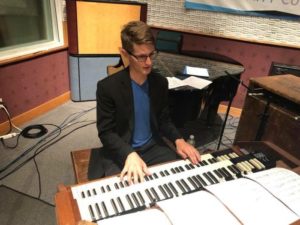 In a distant galaxy (Wyoming) a long time ago (maybe 18 years), a little 6-year-old boy began playing piano, inspired by his father, who played classic rock. A year or so later, his brother came home from middle school with a saxophone, and Dad declared “We have a band!” That little family band played local gigs with two keyboards and a sax, and to no one’s surprise, a star was born.

Tom Amend, pianist and organ player, was that young boy.

During junior high and high school, Tom played trumpet as well as piano, but in his senior year, he began to focus on the piano. He acquired an organ at age 16 and honed his talents on it only in the last 3-4 years.

He went on to study music at the University of Northern Colorado in Greeley, earning his Bachelor of Music in Jazz Studies and a Masters of Music in Jazz Composition under some of the finest musicians on the front range:  Dana Landry, Steve Kovalcheck, Jim White, Eric Applegate, Brian Claxton. In various shows, he continues to play with these former mentors. Tom credits Dana Landry with pushing Tom to stretch beyond what he felt he could do, and as a result, Tom entered the American Jazz Pianist Competition three years, where he was a semifinalist the first two years and a finalist the third year. In this competition, he competed against older professional jazz pianists as well as college players. Today, he is an adjunct professor of jazz piano at UNC.

UNC regularly brings in top-tier talent to work with its students. Because of this, Tom has played with Chris Potter, Christian McBride, Julia Dollison, Jeff Hamilton, Joey DeFrancesco, Dave Liebman and so many others. He told me that each time he played with these masters, he found his own level of ability rising. During college, he played with some soul and blues artists, including the Taylor Scott band, with whom he still plays.

Tom is a prolific composer, having begun in his early childhood with a composition called “King Tut Strut.” Back in college, he wrote “What Do You Say,” which was selected to be performed by the Alan Baylock Jazz Orchestra at the 2015 JEN (Jazz Education Network) Student Composition Showcase. Tom’s compositions and arrangements have been performed by the Downbeat award-winning UNC Jazz Lab Band One, Vocal Lab, Chris Potter, John Fedchock , and Joey DeFrancesco.

My “hot button” about Tom is the breadth of his styles. He plays soul and blues, straight-ahead jazz (Herbie Hancock, Michael Brecker, Clifford Brown, Oscar Peterson), some fusion, and he was featured at Nocturne’s Mardi Gras bash playing New Orleans style piano a la Alan Toussaint, Professor Longhair, et al. With Patrick McDevitt and Alejandro Castano, he plays funk in a group called Freebear.  You can catch them at Dazzle. Heck, I once heard him sound like Little Richard in the middle of an upbeat jazz song!

You should really watch KUVO’s events page on our web site to see where Tom Amend is playing. He plays as leader and as sideman often at Dazzle, Nocturne, and so many other great jazz venues. The Wednesday night crowd at Spangalang is growing until Covid-19 arrived, attracted by a group led by Gabriel Mervine on trumpet with Tom on organ, Alejandro Castano on drums, and Alex Heffron on guitar.

Tom was featured on a CD with Jenna McLean and released his first CD, “Frontier Justice,” in April for which he wrote all but one tune. He’s currently working on his next album thanks to a Pathways to Jazz grant. This will feature his organ band, including 5 horns. A search through Dazzle Jazz’ Facebook page reveals several streamed concerts that feature Tom with folks like Jenna McLean and Alejandro Castano.

A talent like this can’t be held down by some “stinkin’ virus”! He’s doing these shows and he’s teaching with CCJA, including a week in their Westcliff event.