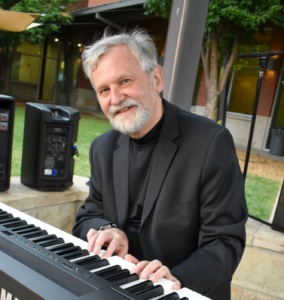 Andy came to us in Denver via a most circuitous route both geographically and musically. But his history here for over 30 years with the Big Swing Trio has cemented his roots as a jazz musician here on the Front Range for sure.

He was born in Copenhagen of two naturalized American citizens; his father worked for the US in foreign service. He lived there for four months. Before he finished high school, he had lived in the District of Columbia, India, Germany, Belgium, and the Hague, where he graduated high school. He did love this life but said the loss every few years of wonderful friends was painful. However, he is still in touch today with a select few.

Of all the places he’s lived, he found India the most comfortable. At that time, there was no terrorism and the family needed no guards. He was free to take his bike wherever he wanted and used rickshaws as well. He was there at the height of India’s war with Pakistan which he wryly told me ended when they ran out of bullets.

There was a gap year, but he finally decided to come to the University of Colorado in Boulder where he earned a degree in Music Performance. However, he was not actually ready to start.

Andy was introduced to music by his father, who played classical piano as a hobby. Andy had a record of Prokofiev’s Peter & the Wolf and one called “The Story of Jazz.” Andy developed a very early interest in rhythm. He imitated his dad’s playing without the benefit of reading music. At age 8 he entered a group piano lesson but continued his playing by ear only. His father was able to help him until the music Andy was learning became too challenging. So then Andy just had to begin to read music.

While he continued playing classical music and actually composing some, he also enjoyed blues and rock music and began improvising using rock scales. In Germany, he met a fellow who exposed him to Miles Davis and Charlie Parker. He got Andy copying jazz music by hand. Andy borrowed records from him. He did not see himself moving in that direction. He felt he was a classical musician.

On the other hand, he was improvising the classicals he played for a modern dance group. After his gap year, he decided to attend college but needed a crash course to prepare a classical repertoire for auditions. He worked hard at this and attended UC for four years. Even at this point, he was dedicated to classical and did not see himself as a jazz musician. Improvisation? You bet! Jazz? No, not for him.

One day he saw an ad for a pianist for a vocal group. He tried out and was chosen to play with Rare Silk. Their first gig was at Wall Street Jazz Cellar. When a sax player was added to the group, it was Eddie Shu, a multi-talented jazz musician. Eddie “kicked my butt!” Andy told me. Now he became determined to figure out this jazz stuff. And if you’ve heard Andy Weyl play, you know he did it!

Other early experiences deepened his understanding and skills. He started at the Mezzanine, a bar in the Boulderado Hotel, once a week. This grew to twice a week, and on until he played there 5 days a week. He played weekdays at El Chapultepec for three solid months where he played with such luminaries as Dakota Staton and Bobby Shew as they visited Denver. He praises his experiences with James Van Buren and Spike Robinson, both for extended periods.

Thirty years ago, the Big Swing Trio came to be. This group has been together since! The trio includes Mark Diamond and Paul Romaine. Believe it or not, they appeared on a Perry Mason episode, playing their instruments. Well, appearing is the operative word here. A scout for the program happened upon them. He needed them for one scene, and they performed. But their music was overdubbed by a different group! I think this trio has more fun together than any other group I’ve seen. They are not about “antics” – they are three top-flight musicians – but as three old friends will do, they definitely add a sense of fun to their repertoire.

Meanwhile, he has played Gershwin with the Boulder Philharmonic and the National Repertory Orchestra, recorded two albums (33 years apart) with the Jazz Worms, backed up James Moody, and also played with Ken Peplowski, Ron Miles, Javon Jackson, Jimmy Witherspoon, Regina Carter, and so on. He has recorded with Keith Oxman and Mary Ann Moore.

Like all piano players, he has suffered some miserable gigs. At one with a particularly poor piano, the dampers were off the strings, and everything he played reverberated.

He recently joined the After Midnight Jazz Band, another band with a 20-year history, which plays shows and commercial gigs. He plays many intricate pieces with them. The band is led by Roger Campbell, a clarinet player, and is modeled after the Benny Goodman Sextet.

It has been 43 years since his first jazz job with Rare Silk. Let’s hope Any Weyl stays based in Colorado for another 43 years!