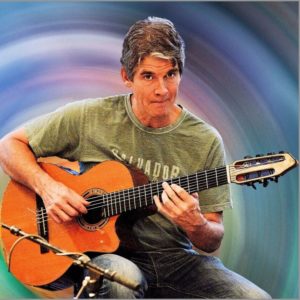 BILL KOPPER, Guitar – Many moons ago, on a farm in Illinois, far from Chicago, a young farmer, who was also a guitar student, was working in the barn, perhaps flinging hay, or repairing a diesel tractor, when the radio station he was listening to made him stop and wonder, “What the heck is THAT?”  He was hearing  Carlos Barbosa Lima playing Brazilian music; and this farmer’s  son  was hooked.  At that point, Bill Kopper had been studying guitar for about 4 or 5 years and was immersed in R&B, pop, and especially blues, since the farm was located near the Mississippi River.  As a youth, he played a couple of riverboat gigs, some R&B, some pop, and then he began to explore Brazilian music.

He moved to Colorado and finished high school, then attended CU, studying History back when CU’s music department was mostly classical.

He developed his talent and added jazz to his repertoire, which he credits to his association with Billy Tolles – a link to the source of jazz and blues and a masterful tenor saxophonist.

Kopper  lived in Spain for a while in the 90’s, playing in a Brazilian group including Victor Mestas, who now lives in Boulder and is part of a group with Bill.  More on that shortly.

So, we’re looking at a well-rounded guitar player here, who has backed up Renee Marie, recorded with Rekha Ohal, was in a quartet with Bob Montgomery, and is in Brad Goode’s exceptional Polytonal Dance Party group, which explores superimposing chords for some of the most challenging music out there!

But his heart beats for Brazilian sounds and Choro, a more creative branch of Brazilian music.  His roots there today run deep, deep, deep.  He has had a long-time friendship with Sonya Vallet, with whom he recorded a CD in about 2010.  This past May, he played in Spain at a music festival with Sonya Vallet and other  Spanish musicians.  He plays with Ian Coury from Brazilia and Alesandro Penezzi.  He’s part of a local Brazilian style group, Curacao, with Eric Gunnison, Bijou Barbosa, and Raoul Rossiter.  He has played lately with Carmen Sandim, a pianist from Brazil who is a masterful composer as well.  Dexter Payne, another outstanding “world music” talent, also partners with Bill frequently.  I should mention, Bill plays a 7-string guitar, which is perfect for this music.

A project that is really taking off is a group called “Ginga,” a septet that includes Victor Mestas.  They began as a Choro and South American instrumental group, but it has evolved to primarily Samba; and Bill loves the very danceability of all this music.  Ginga’s audiences are known for crowding the dance floors wherever they’re playing.  Oddly, as the group developed, Bill found himself playing mostly the bass with Ginga!  The group did a gig in Berkeley California at a Brazilian festival.  They will also be at The Mercury Café in Denver on December 31.

I asked Bill about his musical ambitions, and he replied that he just wants to be happy whenever he’s playing.  He’s always happy playing Brazilian and Choro, so he’s succeeding beautifully.

Bill plays solo every Thursday, at 6:00, at a Spanish restaurant called Dagabi Cucina, a tapas bar in Boulder, and I, for one, will get there to hear his solo guitar. You can hear him on November 3 at Caffe Sole with Curacao, November 4 at Muse Performance Space in Lafayette with Khabu Doug Young and Raoul Rossiter, and many more gigs. Check out Bill Kopper Music.