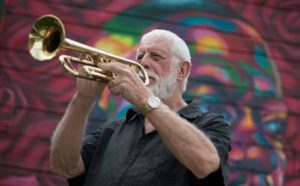 Bob Montgomery is yet another example of an international talent who has settled in Colorado by choice to enjoy the great local musicianship we all appreciate here in Denver.

Both influenced by and an influence for Clark Terry, Bob toured Europe with Terry’s “Big Bad Band” and appeared at Town Hall in New York City with Clark Terry for the New York JVC Jazz Festival’s tribute to Terry.  Clark speaks of Bob several times in his autobiography  ”Clark” and Bob appears in Clark’s movie “Keep on Keepin’ On.”

A native of Garden City, Kansas, he was inducted into their Hall of Fame.  He has earned quite a reputation as an educator, earning him awards such as “Jazz Educator and Performer of the Year,” and “Colorado Jazz Educator of the Year.”  He has served as State IAJE President in both Kansas and Colorado and has directed All-State Jazz Ensembles in at least 5 states.

Bob founded and directed Clark Terry’s All American Jazz Camp and Rich Matteson’s Mile High Jazz Camp.  He’s a founding member of the “Colorado Gift of Jazz,” and is a founder and director of the Telluride Student Jazz All-Star program which has helped hundreds of young jazz musicians enter the world of jazz as professional performers. 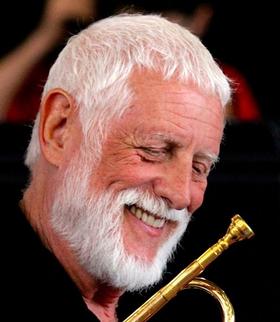