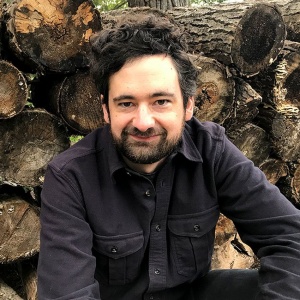 His biography describes Brian Claxton as an old soul and passionate student of the history of American music. Of course, I just had to ask Brian what it means that he’s an “old soul.” He explained a bit sheepishly that this was written by his manager then did his best to explain those words. He didn’t quite succeed, saying, with ums and ers, maybe because he’s deeply into old jazz and gets along with older musicians. The same biography says he is known for his electrifying groove and rhythmic mastery. Heck, having witnessed his playing, I didn’t need to ask about this at all! I sure can see that mastery!

After 90 minutes one-on-one with Brian, if I had to choose a single word or phrase to describe him, it would be “enthusiastic!” He just bursts with energy. He loves his craft! Brian Claxton is a drummer’s drummer. And what experiences he has had! 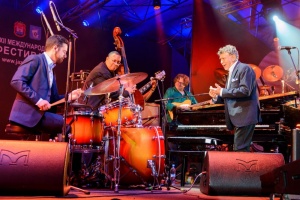 He has earned a Doctorate of Arts in Music with an emphasis on jazz studies at University of Northern Colorado, where he wrote a dissertation on Jeff Hamilton for that degree. At UNC, where he also earned his Masters in Music, not only did he know Jeff, but he worked under Dana Landry, Jim White, Steve Kovalcheck, and Eric Applegate. Not too shabby, eh? Well, a while back, Jim White was called by Monty Alexander to play at Telluride with him. Jim recommended Brian, as did Jeff Hamilton, and gave Brian the heads up that Monty might be calling him. Brian immediately ran to the school’s music library and in short order had studied up on the drum stylings Monty preferred. When Monty called, Brian was ready, and he went to the gig in Telluride with him. It went well and Monty had Brian play with him at Dazzle the next night. That, too, went well…so well that Brian has toured France with Monty. He told me he was even recruited to play one single gig in Russia with Monty, where the audience was so excited they called for four encores.

His entrée to this career is interesting and unique. As a kid, at home, his music-loving parents gave him a toy drum set, and it quickly became clear he should have a real drum set. Eventually, he got that and taught himself to play by listening to the music his parents played (remember Rockin’ Robin?) and focusing on the drums, then imitating. His musical high school experience was very limited. The school was so small there were just 21 graduates in his class, so the music program was limited to a rotating teacher list. Fortunately for Brian, the last teacher was a percussionist.

To apply for a music program in college, this unschooled drummer hopeful needed a demo, and he simply learned a piece by ear. Sorry, “simply” just isn’t the right word here. He worked very hard to succeed on that, again learning his piece by ear. He was accepted at University of Wisconsin at Eau Claire, where he studied classical percussion. On his own, he picked up conga, guitar, and bass; but when he graduated from Eau Claire he still had no formal teaching on a drum set.

Finally, at UNC, he was able to get the instruction he needed and get past playing by ear!

Brian is more than a jazz drummer, too. He has recorded over 40 records as a sideman in a variety of different styles. He’s the bass player for The Burroughs, a group described as making “sweaty soul music.” They are a really fun group that played at City Park this year and will be at Levitt Pavillion later this summer. Go!

Brian just released his first record as a leader in 2020 titled When I Get Home featuring Tamir Hendelman on piano, Graham Dechter on guitar, Jon Hamar on bass and it was produced by Jeff Hamilton. It is available for purchase directly on his website www.brianclaxton.com and Amazon, iTunes, Spotify, Youtube, and anywhere else you listen to music online.

Upcoming gigs include the last three Saturdays in July with the inestimable Peter Sommer at Nocturne in a Sonny Rollins tribute and these: