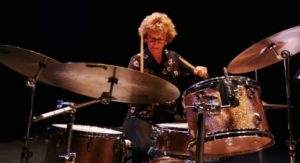 If life gives you lemons, make lemonade. For this musician, life gave her lemonade and took it away, leaving lemons. But what she’s doing to get back the lemonade is just fabulous!

Clare Church began her music education at home in Chicago with a father who was an exceptional tenor singer. There was music in the house all the time. Clare began lessons in piano at about 6, which continued until she was about 14.

In 5th grade, she took up the clarinet, segueing to bass clarinet and later the baritone sax. She expanded on these over time, picking up the alto sax, all reed instruments and the flute. In high school, she continued with the baritone sax.

At Northern Illinois University, she was the first girl in the jazz band. Later she earned a National Endowment for the Arts grant to study with the great Dave Liebman, which she did for two years. In 1984, at a women’s jazz event, Rufus Reed asked her to come to the Aspen Music Festival. This turned out to be a very special time, since she met Brad Goode there and because John Riley happened to show her a couple of Elvin Jones’ mambo drumbeats for fun. More on that coming.

Clare’s first actual gig was in 1982 with Tony Bennett and the Rockford (Illinois) Symphony, a gig she got through word of mouth simply because she was an excellent sight reader. Clare’s classical chops are as strong as her jazz chops. She played with the San Francisco Symphony as well as the Colorado Symphony.

While living in San Francisco, she had a gig at the Venetian Room where she played with Mel Torme and George Shearing and other acts that came through. I’m going to have to abbreviate all her jazz experiences, but note the quality of those she played with: Benny Carter, Nancy Wilson, Joe Henderson, Natalie Cole, Doc Severenson, and in Denver, Art Lande and Chie Imaizumi. Outside jazz, she’s backed up the Temptations, the Four Tops, Aretha Franklin, and Gladys Knight. She has played for stage shows.

She was at the very top of her form around 2012-13, both in her sight reading and in her improvisational skills when it all came crashing down. She began to sense a problem holding her notes. She was with Doc Severenson’s band when she knew there was a real problem happening.

What it turned out to be is cranial dystonia, which affects the head, face, and neck muscles. She can have issues eating and drinking. The jaw muscles have actually caused her to bite through a drinking glass. She worked to retrain to no avail. Drug therapies caused other problems. She finally realized she could no longer play the instruments that defined her. She was losing her soul and whole identity.

Here comes the lemonade. Without minimizing the awfulness of the transition period and the effects of this trauma on Clare, let’s look at her today.

Remember that mambo drumbeat she learned back in Aspen? As soon as she had her diagnosis, she made a decision and called Paul Romaine. She chose to stay in music and become a drummer. She is aware that starting drums in middle age will prevent her from ever reaching the chops of a Paul Romaine or a Mike Marlier—heck, there aren’t enough years in which to develop that far! But she reached a level where she can play with just about anyone and do a great job! She has joked, “I hear it perfect, so you need to imagine it’s perfect!”

Today, as a drummer, she heads up her own group, Expedition (with husband Pete Lewis, Adam Revell, and Jason Malmberg), and they’re as much fun to hear as any group around. Pete writes their original songs and arranges all their music. The group has played at the Muse with guest artists like Greg Gisbert and at Dazzle with Peter Stolzman. She takes calls for many types of gigs. She’s a darned good drummer!

Clare is also a music teacher directing two jazz bands in high school and teaches music at an elementary school, as well. She teaches Jazz Techniques for Music Educators every spring semester at CU.

But best of all, Clare and Pete Lewis have opened the Muse Performance Space in Lafayette, designed to create a community of musicians, artists, and students. They host performances of all types there and before the pandemic, had jam sessions on Monday nights that were just great fun. During the pandemic, they’ve offered many streamed concerts, many of which can be viewed on Youtube by searching Muse Performance Space. Yes, she misses what she had, but she has definitely landed on her feet, with a sweet glass of lemonade in hand!