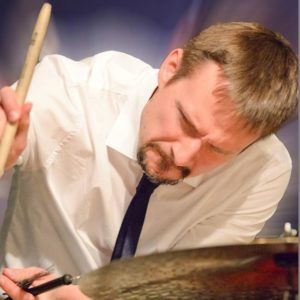 This month’s spotlight is on another incredible musician who transplanted to Denver and is taking full advantage of the jazz environment and the supportive local jazz musicians that surround us here in the Front Range. It’s Dru Heller, a drummer who clearly “has it all.”

Dru began his playing by just listening to music and teaching himself the drum sounds he enjoyed. He actually didn’t begin formal drum training until shortly before he went to college. He began in a community college and transferred to Whitworth University, earning two degrees:  one in percussion; the other in jazz performance.

After first working in Spokane, Washington, for a few years, gaining performance experience, he came to Colorado in 2013 to pursue a Master’s degree in jazz performance and pedagogy at the University of Colorado in Boulder. He had the great good luck to study with Paul Romaine, John Gunther, Art Lande, and Brad Goode.

Dru said one of his reasons for choosing Denver was Art Lande. He credits Art for being one of his main influences and the “go-to guru” for musical creativity. Dru just returned from New York where he played with Art. He has also played at Dazzle with Art and Grammy-nominated Kate McGarry.

Another of Dru’s influences is Don Byron. Dru recorded the soundtrack for a PBS documentary, the story of Lorraine Hansberry. The score was written by Don Byron, and the documentary, called “Sighted Eyes/Feeling Heart,” came out about 6 months ago. Dru credits Don with a great deal of support in his musical development.

Dru is an affiliate faculty member at Metro State, where he teaches many music classes, including music performance for music majors.

Dru is a sideman on a number of CDs, including “Basic Economy” with Ben Markley and Greg Osby.

So, what can we look forward to from Dru?  There’s a new CD coming with a band called Art Deco on a CD called “Free Range.”  This one includes Matt Smiley on bass, Josh D Reed on trumpet, Briana Harris on sax, and Alex Nauman from Montana on guitar.

Another project that clearly excites Dru is a yet-to-be-named CD that will be coming out shortly led by and with all music composed by Carmen Sandim.  Carmen writes incredibly unique, beautiful, intense compositions, according to Dru.  This CD includes Bill McCrossen, the bass player we spotlighted last month.

On September 7 at 7:30, Dru will be with his group “FLEX” AT Boulder Piano Gallery.  “FLEX” is Dru, Art Lande, and Gonzalo Teppe. You can see these three incredible musicians for just $15. On September 9, Dru will be playing drums behind MaryLynn Gillaspie at the first annual Colorado Jazz Musicians Festival in Crested Butte (September 7-9). If tickets are still available, they can be purchased at www.cojazzfest.org. If you can’t get there, watch for him locally. He is in demand by many other musicians and shouldn’t be hard to find at a Front Range club.  You will love his drumming!