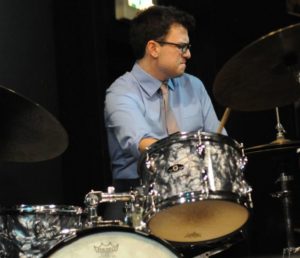 Today we’ll Spotlight one of the young lions who came through Denver’s educational and opportunity-laden jazz environment to become one of the hottest and most talented drummers on the scene today.

Alejandro Castaño’s achievements from 4th grade to now belie his 28 years. He is in high demand by Denver’s top musicians for his perfect timing and is beloved by his audiences for the joy he displays in his exciting playing.

Since about 2012, Alejandro has traveled to Costa Rica annually, touring the country for gigs and teaching master classes at the National University of Costa Rica.

Alejandro is a regular member of the Annie Booth trio (straight-ahead jazz) and a founding member of FreeBear which plays mostly funk music written by Patrick McDevitt, that’s so much fun to hear.   FreeBear plays at Dazzle the last Friday of every month at 9:00, after the Ken Walker group.

For the past two years, he has been the Director of Youth Education for Gift  of Jazz’ Jazz for the Schools, in which 100 DPS students are bused to Denver’s McNichol building where they learn about jazz and have a one-hour presentation.  He’s a teacher at Denver School of the Arts, teaching percussion and jazz.

He plays most every Wednesday at Spangalang with Gabriel Mervine.  He may be the busiest drummer on the Front Range today!

Alejandro didn’t come by all this success simply by studying in school and private lessons and banging away on drums in his basement.  Nope, it’s the Denver environment and opportunities created by our top musicians that made Alejandro exceptional.

First, when he was in middle school, while studying drums in Arvada’s school system, he came upon KUVO on the radio one day.  His antenna went up immediately and he could see where his seminal drumming would take him.

Coming up through high school, Alejandro was in the drum line in marching band and earned a spot in the Blue Knights, a competitive drum corps.  Like other local musicians I’ve spoken with, he credits these marching bands with giving him the discipline and exactitude needed for excellence.

When the Colorado Conservatory for the Jazz Arts needed a drummer for one of their jazz groups and for a salsa group, Paul Romaine reached out to Alejandro and offered him a position in both groups.  While there, he met Annie Booth; and in the salsa band, he met the wonderful bass player Patrick McDevitt who, oddly enough, played piano for that group.  His friendship with both of these fine musicians has continued through college at CU and Metro State and into today.

Bob Montgomery has run what he calls a Mentor Series at the Telluride Jazz Festival.  He auditions young musicians, many from other countries, and puts together a band to play there.  They go to Telluride a week ahead, rehearse, and play at the festival.  Alejandro was part of that group and will be there again this year in an alumni version of Montgomery’s band.   (On a side note, I want to point out that in Spotlighting about 25 musicians in this series, the name Bob Montgomery comes up constantly as a mentor.  If you’re a Denver musician and haven’t been influenced by Bob Montgomery, you are rare!)

Another project for Alejandro is The Gratitude Quintet, for which he is transcribing all the music on a hard-to-find  Lou Donaldson recording called Fried Buzzard.  They will present a Lou Donaldson tribute at Dazzle on February 15.

On February 27, Dazzle is presenting a combination that can’t be beat:  The Annie Booth Trio along with the Big Swing Trio.  I can’t wait to be there!

Three years ago, KUVO featured Alejandro among 30 exciting young musicians in our “30 Under 30” features.  In the intervening years, he has blossomed even further.

He has played with all the big Denver names like Ron Miles, Greg Gisbert, Eric Gunnison, Josh Quinlan, Pete Olstad, Peter Sommer and he even backed up Steve Turre live at KUVO.  He credits Bob Montgomery, John Gunther and Paul Romaine for both musical growth and in the case of Romaine, personal growth.

You really need to get out to hear and see Alejandro live! Come to Spangalang on a Wednesday evening (7-9 pm) and watch KUVO’s Events page for some of the groups named above.

I need to wrap this up with a warning to Jeff Hamilton: Watch out, Jeff! Alejandro is right behind you!