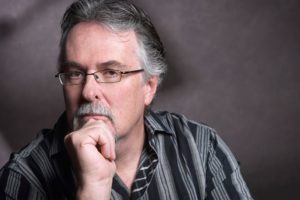 Eric Gunnison is a happy man who has lived the dreams and aspirations of his youth. It shows in his playing, and in his serene personality. Before meeting Eric for this interview, I heard numerous people say “He’s a really, really nice guy.” And he is!

Although primarily raised near Buffalo, New York, Eric lived for some time in Bangkok, Thailand. This gave him a desire to travel extensively and see the world.

Growing up with musical parents gave him the dream of becoming a musician. Eric’s mother was a fine opera singer; his dad played drums as a sideline to his full-time work. Listening to big band music with his father inspired him. So young Eric began playing drums on his father’s set and with parental coaching became good enough to take paying gigs through his high school years.

He went on after high school to Berklee College of Music in Boston and, much to my surprise and probably to yours, earned a degree in classical composition. He studied this while studying jazz at the same time.

As a pianist, his early experiences tended toward accompanying vocalists. His then wife was a singer, but very shortly after graduation, he was picked to accompany The Lettermen and accompanied them during their 1980 tours of Asia and the United States, also recording with them. Following that period he was the synthesizer player for the popular vocal quartet Rare Silk for about 4 years.

Needless to say, many other gigs allowed him to meet many other people. One of these people also managed the esteemed Carmen McRae. One day, she lost her pianist and this manager recommended Eric. He was asked to audition for her. I must remind you that Carmen was also an outstanding piano player and so had high standards. Eric sat and played a tune. When he began a second tune, Carmen simply joined in singing. It took two songs for her to tell Eric to be at the Blue Note in New York next week. From there, he was off to Europe again, this time with Carmen.

I asked about the rigors of touring. In these jobs, you can play a gig, then hop on a train, and have a show in the next town. Early on in his career, it was like that; but with Carmen it was much more relaxed. She would have, for example, three days in a city followed by a day or two off, then travel to the next location. Now, to me, that’s a great way to tour!

We talked about what special traits a musician must have to back up a singer. Eric said that from his youngest days playing drums, his parents told him he has to listen. Really listen. They taught him that whatever he’s playing, it’s not about him. His job is to support. He feels that background stood him in good stead with singers.

We discussed about how a musician learns and grows from each new musical experience. Eric acknowledged that with Carmen, he became more complete and professional. After all, he was now in bigger clubs and concert halls worldwide. This grows one up pretty fast. In addition, he learned from Carmen the spectrum of tempos. She can sing a ballad in a tempo so slow, many fine musicians would struggle.

Now, we have talked about singers, but that’s just a small slice of what Eric has done and will do. He plays solo, in trios, quartets, big bands, and pretty much any group you can name. For the Bob Florence big band when they played behind Carmen McRae, Eric did all the arrangements and even conducted the band.

I could fill a page with the names of nationally known musicians who’ve enjoyed playing with Gunnison, but you can find that information in many, many articles by searching Eric Gunnison on KUVO’s web page or just Googling his name. I apologize for all the missed names, but that was just not the intent of this interview.

I asked Eric what, in his long career, he is most proud of. He said he’s very proud of certain of his recordings and pointed to Carmen Sings Monk. But he is most proud of his students, many of whom have gone on to successful careers of their own. He teaches at University of Denver’s Lamont School of Music.

So, what does Eric Gunnison see for himself in the future? What are his goals? He wants to do more composing while exploring various genres, including Fusion. He would like to play more gigs in which he can feature his own compositions, which are already many.

Asked what one thing he’d want known about himself, he responded, “I like to play music—all styles of music!”