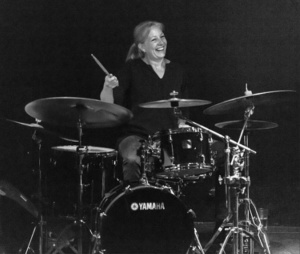 A rare Denver native and product of our Denver and Colorado schools, Jill Fredericksen has her roots both firmly here and yet deeply embedded in Balinese Gamelan music. More on that later.

Jill was born into a musical family in Denver with a father who was a band director in a local high school who played woodwinds. He performed with and arranged for The Hot Tomatoes and arranged music for the Denver Brass. Jill’s mother played and taught piano. Jill remembers the days when her dad and Paul Romaine’s dad played with a dance band every Friday and Saturday night at the Brown Palace Hotel.

The youngest of four girls who all played instruments such as oboe, piano, or flute, and one who also sang, Jill was known for tapping, tapping, tapping on tabletops. While she loved piano, adolescent Jill just wouldn’t take a serious interest in piano because – of course – mother played it! So Jill chose percussion.

Starting with a snare drum in 4th grade, in 5th she received her high hat. She studied with Bill Roberts, principal percussionist of the Denver Symphony from 6th to 12th grade. She attended the University of Northern Colorado for two years, then completed her degree in Jazz Performance at Denver University. From there, she began playing freelance in Denver’s growing jazz community. Jill feels fortunate to have played with so many great jazz musicians from the local scene.

What wonderful experiences she has had. In the 80s she toured for the Department of Defense in an all-girl rock band playing covers for servicemen/women all over Asia and in Australia. She recalls being in Korea’s demilitarized zone where, in one building you were in North Korea at one end and at the other end, South Korea. She later traveled Europe several times in an all-female jazz group (unrelated to the military) and played in Germany, Austria, Switzerland, Ireland, and France. Please don’t assume she’s a “girl drummer,” though. She’s a drummer, period. Here’s proof:

For instance, she played for many years with the incomparable Ellyn Rucker and recorded a wonderful album, “Live in New Orleans,” with Ellyn and Mark Simon as well as “Thoughts of You” for which she also designed the album cover. She has also recorded with Spike Robinson, Keith Oxman, Andy Weyl, Mark Diamond, Art Lande, Greg Gisbert, and Peter Sommer.

Jill was the house drummer two sets a night Wednesdays through Saturdays at Wynkoop Brewery’s Jazz Works, where national acts would come through. She could not begin to name the famous people she played with there because there were too many. But her defining moment there was playing with Red Rodney and Chris Potter and performing with them at the Telluride Jazz Festival along with Lou Fischer and Eric Gunnison. She said it was one of her most profound experiences and so very uplifting.

For years, she played with Laura Newman and Friends, with Vlad Girshevich and Wendy Fopeano at Mead Street Station and then Tennyson Tap, and finally Herb’s Bar. They played together every week and she said she misses those fun times and would wish them back!

And yet, Jill explained that her life today, other than her garden, deeply involves Gamelan music, the traditional music of Bali, Indonesia, which she was introduced to 34 years ago at a people’s fair. After that, she began studying music and participating in the community orchestra Gamelan Tunas Mekar. The music is predominantly percussion with bronze metallophones played by mallets, bamboo flutes, gongs, and other unique instruments. The music isn’t written, so one must study with a master and learn through a form of mimicry. Jill’s home is the rehearsal space and center for Tunas Mekar. They rehearse twice a week there (shoes off—it’s culturally respectful!) and play publicly several times a year. I watched a YouTube video and streamed some of this music as well, but Jill explained to me that listening to a recording just isn’t how to experience these sounds. You need to be there live so the very vibrations of the instruments get into your head and body. You need to be immersed for the full experience.

With all of these music credentials, Jill remains a person who prefers not to be the focus of attention. She enjoys supporting other musicians and is undeservedly modest. I mentioned to her that she has a reputation as one of the rare drummers who has perfect time. I have heard that more than once. She declined the compliment.

On May 21, she will be with Greg Gisbert and Tom Amend at Nocturne doing straight-ahead jazz sets.

On May 23rd, she’ll be back at Herb’s Bar playing with Vlad Girshevich and Wendy Fopeano, playing what she describes as the jazz music that heals her.

On May 28, she’ll be playing gorgeous Latin with Victor Peres Mestas at Caffe Sole in Boulder.

I think you need to see Jill Fredericksen in all three genres to get a picture of this outstanding Colorado musician!