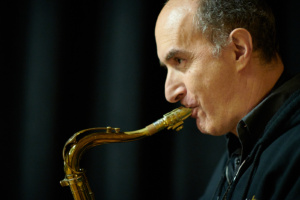 I confess! I’m excited! I heard some music on KUVO recently that stopped me in my tracks. What’s that? What instrument is that with the tenor sax? I love this sound! Busy as I was, though, I didn’t check KUVO’s playlist but hoped I would hear it again soon.

A couple of days later, I saw Keith Oxman playing his ever-present tenor sax with Jeff Jenkins, Gonzalo Teppa and Todd Reid at a memorial concert for Joey Pearlman. I knew how respected Oxman is in Denver, liked his sound, and finagled an introduction. We arranged to meet for an interview a few days hence.

So I quickly began streaming as much as I could to hear more of his work. What a surprise and thrill to come upon that unique sound! It’s his collaboration with bassoonist Frank Morelli, a bassoon soloist, chamber musician, and teacher at Juilliard and Manhattan School of Music, and I listened to it repeatedly! If you haven’t heard it, do whatever it takes to find “The Ox-Mo Incident” on Capri Records. They are backed by the rhythm section of Jeff Jenkins, Ken Walker, and Todd Reid.

While you are at it, you should give a listen to any of his 13 CDs under his own name. Over 50 of the tunes are Oxman’s own compositions.

We have a real treasure here in Denver in the person of Keith Oxman. He’s a one-of-a-kind high school music instructor. You know what I mean. Too many music instructors in school aren’t really practicing musicians. Some have bored my own children right out of bands. Keith inspires his kids whether teaching classical music, music theory, or leading them in the big band. Under his leadership, East High School’s music program was inducted into the Colorado Music Hall of Fame along with Earth Wind and Fire, Bill Frisell, and Ron Miles. We talked at length about his teaching, and I wanted to go back to high school.

Oh, for the record, Javon Jackson was one of his students. Enough now about him as a teacher. There’s too much more to tell. I’ll get to the people he has played with and recorded with shortly, but let’s start at his musical beginnings.

His parents, fortunately, were very supportive of young Keith’s interests and ambitions. No musical family, this one. At one point, Keith asked his father what he likes to listen to. The answer was “silence.” But Keith, by age 5 or 6, dreamed of being John Lennon, and he was given a guitar and lessons. In elementary school, where there was a strong music program, he wanted to play sax but was directed to take up clarinet, which he did. But he continued to want to play sax. He later expressed this to his cousin, who had given up on sax, and the sax became Keith’s.

Keith went on and achieved his master’s degree in clarinet performance at Lamont School of Music at Denver University. But his love of the sax won out in the end.

In his professional career, he has recorded with Houston Person (another gotta-have-it recording!), Charles McPherson, Curtis Fuller, Dave Liebman, Nat Yarbrough, and more. He was on the road with Buddy Rich. That was his only traveling job.

Other playing experiences include Art Blakey, Mel Torme, Pete Christlieb, Paquito D’Rivera, and Red Holloway. Add Louis Bellson, Tom Harrell. Shall I go on? Locally, it would be easier to name those he hasn’t played with than those he has.

I love to ask for “most thrilling moment,” “best gig,” and “worst gig.” Keith had great answers for these. He played once, just once, for the Ringling Brothers Barnum & Bailey Circus. He said the music was so hard his mouth was bleeding at the end.

He had a couple of thrilling moments. In college, Aaron Copland came to conduct the wind ensemble, and Keith said he’ll never forget that!

No less a thrill was going to hear his sax hero Sonny Stitt in 1978 when he was playing at Clyde’s Pub. Keith wanted Sonny’s autograph. But Sonny engaged Keith and insisted he sit in. Keith knew all Stitt’s solos, having studied them hard, and Sonny was impressed with Keith’s playing. But what he said next was transformative for Keith. Stitt said, “I hear you’ve been listening to all my stuff but you are still a beginner since you can’t play it in all 12 keys.” This gave Keith much incentive to dig deeper into his skills. For the next five nights, they actually went back to Stitt’s room and talked well into the next morning. Another realization came to Keith from that experience with Sonny Stitt: Stay sober. And he has.

No one-trick pony is Keith Oxman. I asked what would surprise people to know about him. Not only was he once a licensed CPA, but he is a master chess player. He plays competitively and has about 500 books on chess in his home.

He has been a member of The Jazz Worms since its inception. In 1987, they released their first recording. Thirty-four years later, they’ve released their second album, “Squirmin’.” The Jazz Worms are Andy Weyl, Keith Oxman, Paul Romaine, Ron Miles, and Mark Simon. These guys are some of Denver’s best, and they have been great friends for a ga-zillion years. Marc Phillips of Part-Time Audiophile says this: The Jazz Worms have seen too much, played too much, to fall back on the past and tidy things up while they’re there. This is vital jazz, the way it was once played.

Keith will be at Dazzle on September 10. I will be in the audience. You should plan on it, too.