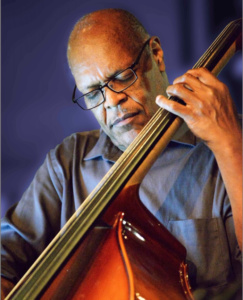 Ken Walker is known as the “first-call” jazz bassist in the front range, which means when top national talent gets a booking in this region, Ken is the bassist they call to accompany them.

Ken is one of the only local musicians I’ve interviewed who doesn’t come out of a musical family. His first introduction to playing an instrument occurred in the fourth grade when a musician was brought into the school and introduced Ken to the cello. After that two-year experience, music disappeared again for Ken until the 9th grade, when he picked up the tuba for the high school band. This he played all through high school, enjoying successes like achieving second chair in the all-state band.

His foundation in music theory was developing during these years, and he decided to attend Arkansas Tech University to major in Music Education, with the goal of becoming a school band director. It wasn’t until his second year that his curiosity about jazz and the new percussion teacher’s need for a bass player merged. Our young man, who had developed a level of classical expertise, began to discover jazz. His understanding of music theory led him deeper into the mysteries of creating jazz music.

While tuba playing was his mainstay during college and his senior recitation was with the tuba, he did begin transitioning to bass in his sophomore year.

Here he is in a college music program in a town an hour outside Little Rock, Arkansas, a city not known for being a hub of jazz, so I had to ask him how he delved into this art form. Among other things, he found the music of Leroy Vinegar to be accessible and spent time transcribing his bass lines. He put together a jazz group that played gigs in the Little Rock area.

After college graduation, he played 5 nights a week at a Little Rock steak house with Charles Thomas, a piano-player and Robert Tresvant, a drummer-singer. Ken spent that time “walking the bass,” which he describes as knowing the notes and chords in a tune and simply supporting the other musicians. Still no solos.

Ken’s Ah-Ha moment for learning to solo came from a book he read, “Thinking in Jazz” and from Dizzy Gillespie’s autobiography, “To Be or Not to Bop.” Dizzy’s simple words did it: “I think of a rhythm and I put notes to it.” This was a turning point for Ken. He clearly had the music theory and now he had the tools to do what he needed.

Having played with Benny Golson earlier, at a club called Afterthought in Little Rock, Benny invited him to try out New York, which he did a couple of times. While he found plenty of work opportunity there, he did not feel he would enjoy life in that city. He also played in San Francisco with Pharoah Sanders, who had heard Ken in Little Rock.

A girlfriend was moving to Denver and Ken’s friend Gene Rush had musician contacts in Denver. So he decided to give it a try, moving here in November 1985. Gene Rush gave him a list of musicians to look up, and Ken met half of that list his first time at El Chapultepec! He began sitting in at the Pec, and from there rapidly worked into the Denver jazz scene. During his 12 years at the Pec, he had the chance to play with many of the “big names” who came through Denver, and these folks continue to request him when they are playing out here. At one point, he played in a duet with Kenny Barron at a private event.

We talked about his playing style. While he enjoys his solos and “organizing the notes” to create great solos, he feels strongly that a jazz musician also has to respect his role in a group and in each song. He calls his backing up others “walking the bass,” meaning finding the right rhythm, tone, mood, and notes to support the music. We talked about listening and conversing musically with the others. We discussed the use of space, which is an integral part of good musicianship. Heck, no wonder he’s our First-Call jazz bassist! The list of famous jazz musicians he has played with is so long, I’ll make no attempt to print it here. You can find it on line at Lamont’s web site.

Ken has been a teacher at University of Denver’s Lamont School of Music for 28 years. He feels blessed, too, to be busy enough playing gigs that he has never had to do any non-music related work. He’s an incredibly busy guy! For a while, though, he supplied home-made sweet potato pies for Brothers’ Barbeque, though only for fun.

Yes, he has recorded. Under his own name, he has the Ken Walker Sextet’s “Terra Firma.” Beyond that, you’ll have to look for him as the bass player on albums by such people as Phil Woods, Ron Miles, Lew Tabackin, Valery Ponomarev, and many, many others. His tours include Canada, Italy, and Australia and festivals and venues throughout the USA.

His sextet was formed for the Aspen Jazz Fest back in 1999 and still plays together regularly. For one, they had the last Friday of the month at Dazzle. If you are out there supporting the music, you already know Ken. If you haven’t run into him yet, watch Dazzle’s website for one of his gigs during this Covid time, and be sure to see him when this mess ends.