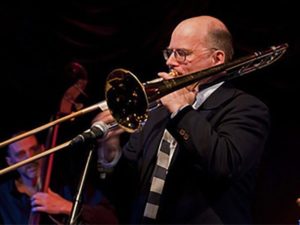 In this series, I’ve been writing about local jazz musicians. Today, our local jazz musician is a trombone player who has lived in New York since 1983. Mark Patterson was raised near Evergreen, went to Colorado schools, and graduated from University of Denver back when the music program was taught in the basement of the administration building. His education at DU spanned everything from orchestra to every size of jazz group and even some opera. Working with Aaron Copland was a highlight for him there. He graduated in 1982 and attended CSU in Fort Collins for a short time before leaving us to try his wings in The Big Apple. Yet, his Denver roots run deep, and he is still involved in a number of area groups. His friendship with two of his DU schoolmates, Paul Romaine and Ron Miles, continues.

Knowing that New York City can chew up an aspiring musician and spit him right back out, I asked Mark how he survived there. He said he survived by pure luck! A friend got him a job hand copying music, which involved delivering recordings, which led to his meeting the right people. After a few years of this kind of struggle, he came in touch with Skitch Henderson and the New York Pops Orchestra. In time, he became a regular player in the orchestra and his music career began to fly.

Let’s look at his NY accomplishments, then focus on his Colorado connections. He has been subbing with the Vanguard Jazz Orchestra since about 1992 and recently began playing regularly with them at the Vanguard and doing some traveling with them as well. The group originated as the Thad Jones-Mel Lewis Orchestra with a regular Monday night gig 50 years ago, which continues to this day.  They have been Grammy nominated.

He has toured a lot with the John Hollenbeck Large Ensemble, whose latest CD, “All Can Work,” is also Grammy nominated. Mark, a composer himself, admires Hollenbeck for his ability to compose “with no fences,” meaning he starts with a blank slate, having no preconceived notions.

But Denver and Colorado are in Mark Patterson’s bones. His father played bass and trombone and, in the ’70s, Dad played with Spike Robinson. Mark, a teenager at that time, was studying guitar with Dale Bruning. Some of his earliest public performances were with Spike, who was known to dislike people sitting in. But he would have Mark sit in throughout his performances. Mark spoke so highly of the value of studying music with Dale Bruning and the kindness of Spike Robinson.

Over the years, his association with Dale Bruning has continued. Mark heads up a quintet, “Group Stories” with Dale, Ron Miles, Paul Romaine, Kent McLagan.  They don’t play often, but they’ve been around since 2009 and most recently played at Dazzle this past August. There is an original suite they play, “The Man with the Blue Guitar,” which is kind of about and for Dale Bruning.  They hope to present it live and record it this spring.

There’s no way to present this article without talking about Convergence. Convergence has been in existence since about 1990, and Mark Patterson joined the group in about 2000. I guess you’d call it Paul Romaine’s group; Mark Patterson attended DU with Romaine and has known and respected him since.  The group consists of some of the best musicians in the Front Range, and if you’ve been reading this series, you know that we have some mighty fine, extremely talented, world-class musicians here. A gig with Convergence gives Mark a great excuse to come on home to Denver to play and visit his local family. He also composes a lot of material for the group and loves being able to play his compositions – and play them so well – with these musical talents. Some of his compositions can be heard on Convergence’s CDs, ”I Can Be There” and “Modern Man.”

He is a prolific composer, studying composition with Donald Keats, Bob Brookmeyer, Manny Albam, and Jim McNeely. He also arranges and adapts music. Interestingly, in composing, Patterson uses pencil and paper rather than the more usual computer. Greg Gisbert, another Convergence member, looked over his shoulder one day and said Mark looked like a modern man using antique tools. Thus was born his nickname, Modern Man, as well as the name of the song and a Convergence album.

Of course, a musician with such gifts is also an educator. Mark travels down to Temple University in Philadelphia weekly. Temple has a fine jazz program, directed by Terell Stafford. He has taught in the Jazz in the Sangres camp with CCJA, the Colorado Conservatory for the Jazz Arts. He has done a residency at CU Boulder with the esteemed John Gunther.

I wish I could give you information about his next Denver performance, but at the moment, none is on his schedule. But you can hear his lengthy, gorgeous  trombone  solo on Bob Montgomery’s new CD, “La Familia” in the song “Peace Now.”  Montgomery was one of Mark’s early teachers. Patterson will be here before too long. Watch for a Convergence gig!