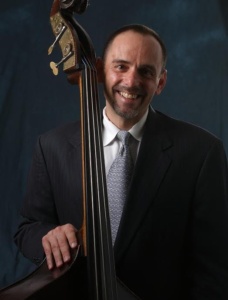 Meeting Mark Simon was quite a revelation. I met a man who has had one of the most exceptional musical histories, working with almost all of the most famous jazz stars who are in my own personal book of favorites but who said to me that, as he neared our interview date, he “was worried I wouldn’t be comfortable talking about myself.” I wouldn’t call Mark self-effacing, but clearly humble. And deeply appreciative of his priceless experiences, some of which I’ll tell you further in this article.

Mark showed his gift early. As an early teen, his friend had a garage band that needed a bass player. Mark saved his money so he could buy an electric bass and was brought into the group with zero experience. When he got Arvada West High School, his teacher introduced him to the stand-up bass, and his future was written! With one single year’s experience, he made All State Orchestra, played in the #1 jazz bandnd got high scores for an original composition at a state contest. Then at Metropolitan State he studied with James Carroll, the principal bassist with the Colorado Symphony. The trajectory continued upward.

Let’s look at some local projects he helped to create.

He’s a founding member of the Jazz WORMS, both composing and performing on their initial recording in 1987. Their newest, “Squirmin” is a new 2021 release. The group is composed of Andy Weyl, Keith Oxman, Paul Romaine, Ron Miles, and himself (the S in WORMS). Each of these musicians is so busy in other projects, there hasn’t been much in the years between, yet they are as tight and creative as you’d expect with this lineup.

Mark worked closely with Paul Romaine and his wife to create the highly regarded CCJA (Colorado Conservatory for the Jazz Arts), which offers a wide selection of music programs for promising young students. See my article on KUVO’s web site

He is an original and continuing member of the very popular group Convergence.

As a former teacher at CU Boulder, some of his students include Gonzalo Teppa, Patrick McDevitt. Wow! Andrew Hudson and Jimmy Trujillo also studied with Mark.

On the national stage, I could try to tell you everyone he’s accompanied, but the list would overtake this article. I’ll drop just a few names here that dazzled me but then I’ll move on to tell you some of Simon’s best memories. Here goes: Mark Murphy, Claudio Slon, Lew Tabakin, Art Farmer, Jimmy Heath, Rosemary Clooney, Regina Carter, Mose Allison, Ernestine Anderson, Eddie Harris, Roberta Gamborini, James Moody, Joe Farrell, Houston Person, Benny Carter. Heck, when Renee Marie needed a bass player for a NY gig, she flew Mark Simon out to back her up. That says something!

I had heard Mark had traveled with Carmen McRae for a few years and just had to hear how that came about. Eric Gunnison had been with Carmen for several years when she lost her bassist. Eric recommended Mark, who arrived at Catalina’s in LA to accompany Carmen, who was known to be very hard on musicians. There was no rehearsal so he was to play “cold.” She had just released “Carmen Sings Monk,” which she featured in her set. Um, is this a challenge, or what!? Mark played on stage, worried and wondering what to expect from her. At the end of the set he got a sweet smile and a comment, “You sound great.” From then on, he was her bassist and he maintained a good rapport with this legend, traveling with her until she no longer toured.

Another memory Simon treasures is playing with Convergence at Dazzle, joined by Christian McBride. McBride, in case you aren’t familiar, is one of the best, most fun bassists living today. Or many would say THE best. It was a two-bass group, and Mark Simon had the joy of trading licks with Christian McBride. What a memory!

Would playing with a Dizzy Gillespie big band be an over-the-top experience for a bassist. I should think so! Mark performed with him at the Botanic Gardens.

Mark was born in Detroit, lived there until his early teens, and has family there. Another career highlight for Mark was to play at the Detroit Montreux Jazz Festival with his extended family in attendance. This was then capped off by his finding a front page picture of himself, Eric, and Carmen in next day’s Detroit News. He still has this clipping.

Yet, just as memorable for Mark was the the Jazz WORMS CD release party at Dazzle in front of a sold-out crowd for the first live post-Covid gig in 18 months.

As we were winding down, Mark asked me to include some of his mentors. He wanted credit to go out to Billy Wallace, Nat Yarborough, Fred Hess, Ellyn Rucker, Dale Bruning, Paul Warburton, Spike Robinson, and Art Lande.

His love of this Denver community as shown in that Jazz WORMS moment and his desire to acknowledge his mentors just tells me the kind of man he is. That he named his bass Gwendolyn just tickles me.