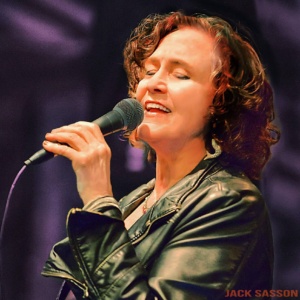 Rare Silk! Most of our active jazz listeners know MaryLynn Gillaspie’s history with Rare Silk, the 1980s Grammy-nominated vocal group. What a story! I’ll try to share some of the interesting stuff I learned about it when I sat with MaryLynn recently. Since she’s currently creating a whole new musical history for herself, I’m certainly going to get to that as well.

Was Rare Silk an accident at the start? Not exactly. But luck was definitely combined with hard work, talent, and guts to bring it to full glory.

MaryLynn and her sister Gaile were raised in southern California to the sounds of records by Sinatra, Fitzgerald, and big bands playing in the house all the time. Their Dad was a trumpet player in the army who chose not to pursue a musical career but never did let go of his love for jazz. MaryLynn recalls that she and Gaile would request the scat song “Airmail Special” on a regular basis. I guess if you grow up on scat, it sticks with you!

They actually didn’t sing much, though. Maybe an occasional special event, but singing wasn’t a big part of their growing up.

In her mid-20s, MaryLynn looked for a change and moved to Colorado, eventually landing in Boulder. Gaile followed later and got a job waiting tables and singing at Fred’s restaurant, where she met Marguerite Juenemann, who was in a vocal group. When that group began to break up, Gaile said to Marguerite, “My sister can sing!” and from those prophetic words, the seeds of Rare Silk germinated. These three young women started performing in local clubs. Radio Station KGNU invited them to sing live for 15 minutes once a week, and to accomplish this they would need three brand-new songs a week. Now, that takes work! They would rehearse 5 days a week so they could be ready.

A couple of years later, with a solid repertoire formed, MaryLynn learned that Benny Goodman would soon be performing at CU’s Mackey Auditorium. Here’s the “guts” part! She called the program council and suggested that Rare Silk should open for Goodman. They were given the job. Now for the “pure luck” part. For some reason, Benny Goodman was in hearing distance during Rare Silk’s sound check. He heard and he listened. He called MaryLynn at home a couple of weeks later and asked if the three of them would tour with him. MaryLynn was knocked out at hearing Benny Goodman on her answering machine and still hasn’t gotten over it.

Their first gig with Goodman was at the Boston Globe Jazz Festival and was live broadcast on PBS. At that performance, after Rare Silk sang the rehearsed and scheduled songs, Benny asked them “Do you have anything else?” Now, this is unheard of, but they pulled it off and sang, unrehearsed and unplanned.

As you might guess, MaryLynn and Gaile’s father was over the moon with excitement! The tour included dates at Carnegie Hall, the Hollywood Bowl, and a week in Japan at the Aurex Jazz Festival.

Think about this! These gals were each only about 25 years old, and a big gig before this time was at the Boulderado Hotel! I had to ask MaryLynn, “Weren’t you scared to death?” She said, “You’re just there, and you just do it.”

As you may know, they recorded three albums. The first album “New Weave,” was nominated for two Grammys, and there was a third nomination for the second album, “American Eyes.” Their last album was called “Black and Blue.” When they finished with Goodman, they added a male vocalist, Todd Buffa, and began to update their 40’s sound to a more contemporary one, mostly by standing around the piano experimenting. Todd would play a chord, and they’d take parts and say “Oh, yeah, that’s cool!” They traveled with Eric Gunnison, Kim Stone, Michael Berry, Peter Huffaker, Jim Ridl, and Steve Holloway. The last two were Coloradans at the time.

I need to set this aside now. The band broke up in 1988. MaryLynn came back to Colorado, married, raised two girls, and did not sing for 25 years. (Yes, this upsets me!) But she earned a degree in photography and has had two photography studios over those years. She does not regret this period of her life and found it all quite fulfilling.

During this time, MaryLynn really thought she would never sing again. She felt it important for me to get this across to our readers to encourage anyone who has crossed anything off in their lives, thinking “never again.” It’s important to never say never!

In about 2012, she put her toe in the water and decided to try being a solo artist. This was a true challenge for MaryLynn, who found such comfort in ensemble singing. Frankly, she was intimidated at the thought. But she self-produced a CD, “Starlight,” which got good airplay on UVO. She began to sing at local clubs, including Boulder’s Caffe Sole, Dazzle, Lannie’s Clocktower, and La Cour.

But she dreamed of creating a truly “professional” album, a dream she fulfilled this year, 2022, with “Secret Language,” which she dedicated to Scott Roche, who was Rare Silk’s manager with Patrick Cullie back in the day and who passed recently. She picked one of the best rhythm sections in town (Gonzalo’s regular group) and added varied top-tier guests throughout. She had it produced by her great friend Kip Kuepper at Coupe Studios in Boulder. Several of the selected songs have MaryLynn’s own lyrics. The result is a lush “jazz-inspired recording” that has been getting airplay on KUVO. Listen for it. Buy it. You won’t regret it! A digital version can be had at https://marylynngillaspie.bandcamp.com/ for just $9!