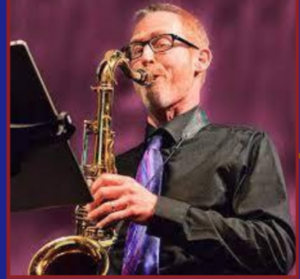 It’s hard to start writing about Pete Lewis because there are so many elements to his personality and experience: Sax player, composer and arranger, athlete, business owner, teacher.

When he was a boy, there was always music in his home, though neither parent was a musician. He would hear marches, classical, and swing-era big bands. He became enamored of the big bands and their players. Then, while he was in college, Bob Crosby and the Bobcats played in town and brought in college musicians to fill in the core traveling group. Pete was thrilled to be playing with a band he recalls from his younger days, a band that still had some of the same members.,

He studied piano, as did all 4 of the children in the family, but he switched to sax in sixth grade. He went on to earn a B.S. in Music Education at the University of Illinois and a Masters in Education plus 60 hours that included music technology.

A deeper interest in jazz started in jazz camp, when he was introduced to the music of Coltrane, Parker, Ellington, and Ferguson as well as Stan Kenton’s blues. He recalled his high school band director bringing him to see Maynard Ferguson.

Growing up in the Midwest, he later moved to Portland and followed that with a 5-year teaching job in Oakland, California. Unfortunately, he lost that job in California when many others did, due to economic conditions. Knowing his and his wife’s love of the outdoors, they made a decision to give Colorado a try. Happily for us, that has worked out beautifully.

His playing career has also been one of success both before and since moving to Colorado. He has played with the Colorado Symphony and the Philadelphia Orchestra, mostly when they are doing “pop” material. He has backed up the Temptations, the Four Tops, Natalie Cole, Linda Ronstadt, and Ben Folds; and he played in the Joe Henderson Big Band and more.

I was quite impressed to learn about his composing skills. In fact, he has written original compositions for every guest artist that has appeared with his group Expeditions, including Ron Miles, Gabe Mervine, Greg Gisbert, Robert Johnson, Greg Harris, Joe Anderies, Paul McKee, Dave Corbus, Heidi Schmidt, etc.

I asked him what one gig if he could relive it, would he choose. He said, playing with Joe Henderson’s Big Band at the Hollywood Bowl. But he added that playing with the Colorado Symphony behind Tony Bennett was magical.

Of course, I had to know about some of the funny things a young musician experiences during those early gigs. He admits with a laugh that he toured with an Elvis impersonator for about 5 days. I just love hearing this stuff!

Pete has released three jazz CDs: Expeditions by the Lewis/Church Quintet in 2004; King of Hearts from his Jazz-fusion ensemble called Polarity (2012); and I’ll Fly Away from his quartet called Expeditions (2016). I should mention that the Lewis/Church Quintet has that name because he is married to Clare Church, who is another beloved and respected local musician. You can find her Spotlight article on KUVO’s website as well. It merits a good read, as Clare has a particularly poignant story.

Together, Pete and Clare own and run the Muse Performance Space in Lafayette. When Clare inherited just enough money to fulfill her dream of owning a music venue, they boldly made it happen. Pete admits to some naivety in getting this business started; two years into it, they are still learning. Pete has a great appreciation for anyone running such a venue.

If you haven’t been to the Muse, you’re missing something! It is such a welcoming environment: affordable and intimate. They bring in the best of our local musicians. If you like, you can bring your dinner in from any of the area restaurants. You can serve yourself an affordable snack or a glass of wine and enjoy an entire evening of great music without the costs involved where you are served dinner and drinks by a waitstaff. I go there frequently, just a 35-minute highway drive from my home in deep East Denver. The highest cover charge is just $20, and Pete says, “If you feel you can’t afford it, just e-mail me.” He doesn’t want anyone excluded.

Pete’s sound on his sax can be sweet and lyrical or he can go into an improvisational riff with the best of them. Go hear him play with The Three Tenors Band at the Niwot Jazz Festival on June 25 or at Dazzle on July 14. He’ll also play at The Muse in Lafayette on July 10.